Dehli, India – Before his first participation in the Nexus youth leadership training course, Pastor Pritam Kasabe did not fully understand what he was supposed to do as a youth leader in his district of Western Maharashtra. 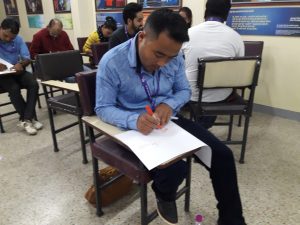 He is not alone. Many Nazarene youth leaders in India lack leadership training and practical knowledge of what it means to work with young people, according to India’s Nazarene Youth International (NYI) coordinator, Vijay Bhalerao.

The objective of NYI in India is for youth groups to function in every local church, and Bhalerao sees Nexus as one way to achieve that.

22-25 May, the first of the two-part Nexus course was held in Delhi for 15 youth leaders and youth pastors from districts in the north of India, with Kasabe and Bhalerao helping to co-teach the material.

The course is divided into three modules and delivered over a minimum of two intense weekends.

The first module (Core), challenges participants to think about their personal and faith values, their context, and their identity. The young men and women then learn about the various transitions that can take place during adolescence (physically, emotionally, spiritually). This is then followed by studying group relations and their roles as leaders.

Explore and In-depth develop these themes further. The Explore module focuses on group dynamics, informal education, and leadership roles of the young people.

The In-depth module enables people to develop their thinking of those subjects by exploring and putting into practice models of theological reflection.

Those who complete the course receive a certificate of completion at their district assembly.

Nexus is the brainchild of Eurasia Region youth leader Diego Lopez, and Louise Kenyon, a former youth worker and now Assistant Dean and Lecturer in Social Theology and Youth Work at Nazarene Theological College in Manchester, UK. Kenyon helped to develop the curriculum.

The course was first piloted in the Spain District in 2016. After it was well-received there by youth leaders and district leadership, it was introduced to the India Field.

Because India is so large and populous, and there are so many churches there, Bhalerao and Lopez decided to offer it separately to districts by zone: east, west, north and south. The course has already been completed in the west, and now the first of the two parts have been delivered in the north. The east of India is scheduled next. 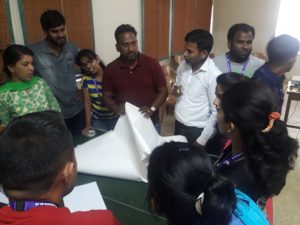 The Nexus course is also planned for Ukraine, Portugal and Sri Lanka this year.

Having gone through the course himself, Kasabe is a believer that youth leaders in India need to learn the material.

“Many youth workers don’t have any idea what they’re supposed to do in their areas or districts. Whatever decisions they make, it is it is done randomly,” he said. “But from this seminar I myself, as a student, understood there should be aim or ambition –  aim at something and have some goal. When we set some goals then we can plan accordingly.”

Kasabe said he also learned about the physical, psychological, emotional and spiritual development of youth at different stages.

“I learned … how to recognize their needs according to their age and how to interact and communicate and be one of them so they can understand not only themselves, but help them to understand the world and be connected with God in the simplest way.

“This is very helpful for me personally, and I’m definitely going to bring it in practice in my own district,” he said.

“It gave us proper guidance on looking at youth problems in the right perspective and to handle issues of youths with patience, understanding,  and very importantly, with the application of theological reflection,” said Susannah Shejule, from Western Maharashtra District.

The learning will not stop with those who take the course, Bhalerao said. His objective is for those who complete the course to teach it to others in their own districts.

“I need to make our theology practical so that other young people will get connected to the Savior and know their Savior and that their growth is holistic growth,” Kasabe said.