Busingen International Church reaching out a little closer to home

Busingen International Church reaching out a little closer to home 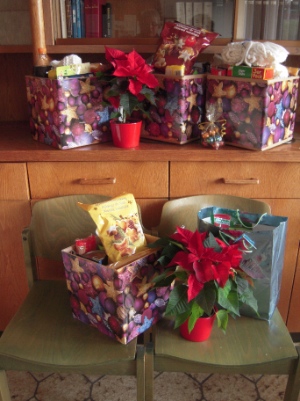 Büsingen International Church of the Nazarene, located in Büsingen, Germany, has a long tradition of helping people in need across the Eurasia Region. This Christmas season, the church is reaching out a little closer to home.

Earlier in the month the church collected items for needy families in Romania. During one of their monthly prayer meetings, while talking about the parcels to Romania, they began to talk about needs locally and their responsibility to neighbors in their own village.

One of the people in the prayer meeting that night was Robbie Blattner. He said, “In our church we send, every year at Christmas, food parcels to countries in the East, so shouldn’t we also consider giving food to the needy on our own doorstep?”

With that in mind, a few of the people at the prayer meeting put their heads together and initiated a feeding program for needy church members and other people in the neighborhood.

After discussing it further and formulating a plan, Dorothea Güting, a church member and NMI President, presented the need to the congregation. The attendees responded generously, as well as giving names of people who were in need.

Güting said, “It was our prayer to find the right people. It turned out that only one recipient is in the church; the others are from the community. We have seven people who received gifts; five are food parcels and two other packages will go to people in an old peoples’ home. Apart from the food, there is a calendar and a candle and a greeting card in each parcel and a flower for the old people.”

One of the older recipients said, “As a child I spent 10 years in a church orphanage and I was treated so badly most of the time, that I am in tears even today when I think of it.  So your parcel is a positive token of a church helping! Thank you!"

Two of the people from the congregation who were making deliveries to the senior citizen home, Judy Radcliff and Manuela Khan, said they couldn’t find one of the people to whom they were supposed to deliver a package, but felt drawn to another room. As they entered, they met an older woman. They presented her with the gift from the church and were invited to stay a few moments. The woman explained that she had been depressed over the past days due to the passing of her brother and didn’t have anyone to talk to or share her feelings with. Radcliff and Khan shared Christ with her that day and invited her to church and told her they would be praying for her.

Güting said, “Our prayers to find the right people were definitely answered.”

They all agree that this should not be just a seasonal event, but one to continue throughout the year and they are hoping and praying that the congregation will continue to not only see the need, but also meet the need.