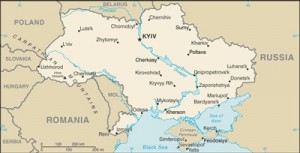 Because of the high percentage of unemployment in Ukraine, so many people are driven to desperation and, as a result, turning to alcohol and drugs. That, in turn leads to HIV/AIDS. Unfortunately, not all who suffer from these diseases have made a consciously wrong choice. The main victims are small children who are born to drug-addicted and/or HIV-positive parents.

For many years, this problem had not been properly addressed by the church in Ukraine. In recent years, however, God has put this desperate need on the hearts of His people. Today, the Ukraine district is ministering to families affected by HIV/AIDS in six different cities. One of these ministries locations began just a year ago in Kiev, the nation’s capital. Iryna Galisevych, CIS Field Child Development Ministry coordinator, started meeting with the children at the kids’ hospital called “Ohmatdet.” It is one of the largest pediatric hospitals in Ukraine, where about 18,000 kids get treated every year in the in-patient department, and about 20,000 get ambulatory help at the traumatology department.

The decision has been made to work with the children from a specific ward. It is the kids who, besides suffering from cancer or tuberculosis, are also HIV-positive.

At first, it was just Iryna’s project that began in September of 2013. Later, two other people from Kyiv Church of the Nazarene joined. Once a week they come to meet with the kids and once a month there is a crafts session for mothers and grandmothers who come to sit with their kids.

“I had this deep desire to serve the kids who are undergoing treatment at a hospital, as well as their mothers,” says Iryna. “There was an American medical doctors’ family who met regularly with the medical personnel in this particular ward and I joined them.” The family that started the movement has left to go back home, but the ministry they began continues.

One 11-year-old boy is currently undergoing chemotherapy treatment. Every single morning, to get to the hospital where the treatment is administered, he needs to get to the other side of Kyiv, which is a pretty big city. Transportation is the problem: Because his immune system is incredibly weak due to the chemo, they cannot take a bus because there are simply too many people, who can be potential carriers of various illnesses. What might seem like a simple flu that takes a week or less to get rid of for most people can be deadly for this boy.

One chemo session lasts for 90 days, and renting a hospital’s car or calling a cab to get to the hospital ends up quite expensive. Finally, the mother called her mother-in-law, a member of a local Baptist Church. “I just don’t know what to do,” she cried.

When one of our volunteers found out about the dire need, he offered a part of the funds necessary for the transport and the church collected the rest. When the mother called her mother-in-law again to tell about this wonderful miracle, the older woman shared that her church was praying for the solution.

There are also ministry prayer needs. Besides serving the kids every week, there is a desire to do something more for the mothers. It will be crafts and conversations, discussing the topics that are close to ladies’ hearts.

Please pray with us on how we can serve these women, as well as pray for supplies, sponsors and volunteers to serve along with us.