‘In Germany there are people that love me!’

Home/News/SnapShots/‘In Germany there are people that love me!’
Previous Next

‘In Germany there are people that love me!’ 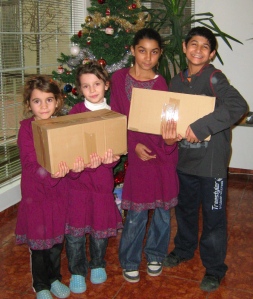 Gelnhausen, Germany – "I’m so happy! Miss Monica, I didn’t know there are people in Germany that love me! Can you tell them ‘thank you’ for me?"

Albert, 9 years old, doesn’t know if it’s too good to be true. In his arms he’s holding a Christmas parcel; it’s so heavy that he can barely hold it.

"He was heavily traumatized when we met him," Monica Boseff, local Nazarene Compassionate Ministries (NCM) coordinator in Bucharest, explains. "His parents are divorced; when his mother remarried, she didn’t want him anymore. Now he lives with his father, stepmother and grandmother in a small house. His father’s salary is barely enough for basic necessities."

Albert is among many people in Bulgaria and Romania who are thrilled to receive boxes of donated clothes, shoes, linens, food and toys from Nazarene churches across Germany each year. Helping Hands Germany organizes an annual Christmas shipment that is divided among Nazarene churches, who distribute the aid goods to church attenders and needy people in their communities.

The Helping Hands Christmas transport that left Gelnhausen at the beginning of December 2011 included 9,000 kg or 61.5 m3 of aid goods (clothes, shoes, linen etc.) and Christmas parcels (food and toiletries) – more than 100 boxes above what was donated the previous year.

About two days later the shipment reached Bucharest where local church volunteers  unloaded the boxes. NCM and Church of the Nazarene Romania distributed 200 Christmas boxes and relief supplies to elderly ladies and families with children in Bucharest as well as needy families in six surrounding villages. The other parcels and relief boxes were sent on to Sighisoara, Tigmandru, Viscri in Romania and Vidrare in Bulgaria, where they were given to children in a boarding school.

Standing next to Albert are Denisa and Sabrina. The sisters have come alone to pick up the parcels. Their mother has to work late hours to feed her family and also has to protect her children from the abusive father. The constant violence has left deep scars in the children’s hearts. What an amazing difference the gifts from the Christmas transport make! 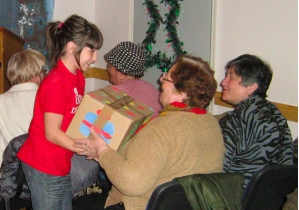 "They were so happy about everything they received," Boseff says, "about the food, the clothes and toys, the school supplies and shoes."

In their gift bags they found two pretty dresses and put them on right away. Now they are simply glowing with happiness. "No one at home is going to give us anything for Christmas," they say. "We want to thank all the good people that made us and our mom happy!"

In Romania and Bulgaria the Christmas boxes, household goods and school supplies cause great joy around Christmastime, but also meet a variety of urgent needs and relieve suffering.

"All these things – the food, the clothes, toys, shoes, toiletries and school supplies – those are things that many people here urgently need, but cannot buy for themselves. They would have not had them had it not been for you to send them!" Boseff writes. "A big ‘thank you’ to everybody involved in this for loving these kids, these elderly ladies and all the people they’ve helped so much by sending this container!"

Helping Hands Germany is a nonprofit compassionate ministry organization founded and operated by Nazarenes in Gelnhausen. The organization works closely with NCM International in holistic development projects and disaster relief, reaching more than 40 countries since it launched in 1992.

Although Helping Hands participates in various emergency relief efforts, the organization emphasizes long-term development projects, as “the mere distribution of relief items forces people into dependency,” according to its website, www.helpinghandsev.org/eng.

Those who want to get involved with Helping Hands can visit the website, which is in both German and English, send donations – both monetary and requested goods, stay informed about the ministry’s projects, and volunteer.