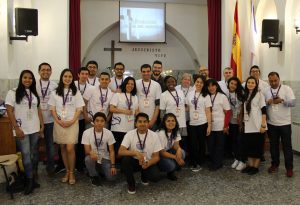 Earlier this year, about 20 young men and women gathered in Madrid, Spain, for one purpose: to participate in a new Nazarene Youth International (NYI) project called Nexūs. Nexūs is an intensive course over a minimum of two-weekends in which people are invited to prepare themselves better for youth leadership.
As part of the NYI Youth Ministry Academy, Nexūs is the first course being given for young leaders around the Eurasia Region. Its purpose is to form leaders and prepare them for the NYI ministry. It is the first of future courses that may be developed. Once completed, participants receive a Certificate of Completion given by Nazarene Theological College, Manchester (NTC).
Nexūs started after a regional conference at which Diego Lopez, NYI regional leader, along with about 80 NYI leaders, noticed that in the Eurasia Region youth leaders were not always recognized for their work. Many NYI leaders did not know a lot about the ministry and how to put it into practice. 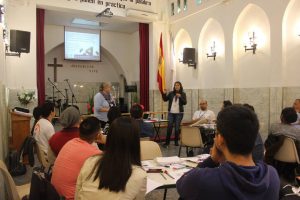 “The idea with Nexūs is to get people into basic understanding of what youth ministry is, understanding people and understanding the context of where they live and work,” Lopez says.
The Regional NYI decided to do a trial run with the Nexūs course on the Spain District to see how the response would be. The trial was in Spain for two main reason: an invitation was given from the Spain District, and the classes could be given in two languages. The district had a very open and sincere participation that helped the leaders see where improvements were needed. Through this experience, Lopez now knows that the courses must be bilingual because of the Eurasia Region’s diversity.
One of Nexūs’ goals is self-discovery.
“In ministry it is important that we know ourselves well,” said Lopez. Therefore, the course is divided into three modules and delivered over a minimum of two intense weekends. There are three modules: Core, Explore and In-depth. Each of the modules covers three main topics. 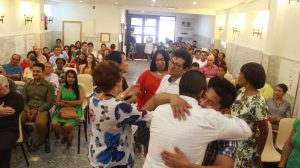 The first module (Core), challenges participants to think about their personal and faith values, their context, and their identity. The young men and women then learn about the various transitions that can take place during adolescence (physically, emotionally, spiritually). This is then followed by studying group relations and their roles as leaders.
Explore and In-depth develop these themes further. The Explore module focuses on group dynamics, informal education, and leadership roles of the young people. The In-depth module enables people to develop their thinking of those subjects by exploring and putting into practice models of theological reflection.
Daniel Ungria, a participant of Nexūs in Spain, said, “I liked that the classes were not just theory. So, we could put into practice what we were learning and it did not become boring, and time would fly by.”
Classes were not as conventional as might be expected. Since Nexūs is about youth leaders discovering who they are, in order to work more effectively with young people, the practical part of the course asks participants to encounter new things about themselves.
“One of the practical things we did that I like was that they made us stand and go to different parts of the church building. We would have to close our eyes and they asked how we felt in that specific area. We then repeated that two more times and I found it interesting that I felt different in different parts of the church,” shared Daniel.

The word “nexūs” means connection or bond around a particular process. What NYI hopes to do is connect people within districts and create a connection between people in the region around a core understanding of youth ministry. The idea of giving the name “Nexūs” came from NTC lecturer and Assistant Dean Revd Louise Kenyon, a long-time youth worker who helped design the course.
“We were trying to find something that was original. I did a quick search for various names for different youth programs, and I could not find any that were really obvious. Then I thought ‘nexūs.’ It has kind of a Latin twist and was something that I hoped would translate across different languages and have some meaning. Looking at the dictionary meaning of ‘nexūs,’ it is a connected group or a series of things. So hopefully around Nexūs there is a common understanding of what we’re trying to do through NYI ministries.”
The youth leaders in Spain gave a great response and encouraged NYI to keep pushing forward with Nexūs. 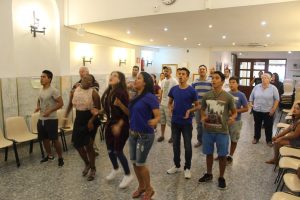 Lopez’s vision is to equip and train people for youth ministry at the local church level. The NYI plan is to hold Nexūs courses on four districts in the coming year and then expand to more districts in coming years whilst developing leaders for the course in local areas. There is a need for teachers who have a heart for youth ministry and want to dedicate time to Nexūs so that, in five to six years, all 51 districts in Eurasia have received a Nexūs course at least once.