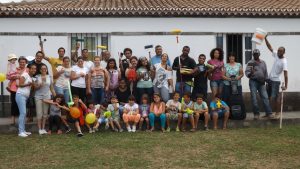 At the end of July, Nazarenes from Portugal and the Azores joined forces on a mission trip to Calhetas, Azores, to share God’s love with neighborhood children and paint their local school.

Calhetas, on the island of São Miguel, has a rough reputation. Domestic violence is pervasive, and many residents have served prison terms. Across the Azorean islands, poverty and social problems are widespread. The Church of the Nazarene recently has made it a renewed priority to develop churches there.

This is the fourth year for Portugal’s annual mission trip called Um Coração Muitas Mãos (UCMM) (in English: One Heart Many Hands). This year, our UCMM Portugal team expanded for the first time to include Nazarenes in the Azores.

On 22 July, 15 of us from the continent met with members from the Nazarene Church in Ponta Delgada to work together on a project that was chosen because of Rogerio and Milene Santos, lay people from the Ponta Delgada Church. They had been ministering at their son’s school, gaining confidence to evangelize there little by little. Through their efforts, our group received the invitation to come and work with the school and the children.

The team divided responsibilities, with one part developing lessons and teaching the children, while the other group moved furniture and painted the walls.

At first, we thought it would be hard to approach neighborhood people, especially the children. But the opposite happened. Everyone was very nice. They were always looking for a way to help us feel more at home. The team was also invited to be part of the local government authority events happening during the week. God was definitely working in the lives of these people.

Ornella Macaringue said, “My best memory was when we arrived at school and I saw that some children and their teachers were happy to see us. It’s like we were contributing to their happiness.” 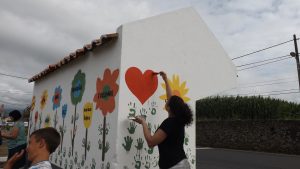 Planning of the Nazarene church service on Sunday was left in the hands of the mission team. The local church welcomed the group warmly. Ornella says God worked in her life “through worship. Every time we sang, or when I had some difficulty and I remembered a worship song, everything would get clearer.”

When the week ended, no one wanted to leave. Everyone got along very well and the children also got along with the group. We felt that we had blessed them, but also felt blessed. All the hugs and kisses and the trust gained was only possible with God working with and through us.

The phrase that our team adopted is: “We went to serve, but we ended up being served.”

How it began
Um Coração Muitas Mãos began in 2013 as a dream to bring the Portugal District together in a new way. Flávio Taela, coordinator, has been involved since the beginning.

“One thing that we noticed is that the traditional evangelism of spreading flyers and saying ‘come to church’ doesn’t work anymore,” he said. 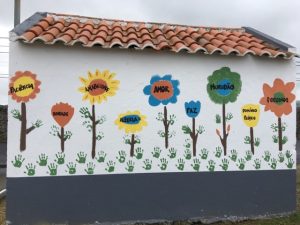 The church could have simply quit evangelizing because of this change. Instead, the district has looked for new ways to share the gospel with Portuguese society.

Taela began to ask, “In what way can we continue to spread the gospel, but work in sync with the needs of the societies where our churches are planted? One thing that has a positive effect in Portugal is creating relationships. It is creating friendships. It is showing that we care for them and from that point forward we can spread the gospel in a less traditional way.

“Therefore, the ministry uses other ways to share the gospel,” he went on. “Through painting. Through work with children or elderly people. Through cleaning, and all of that. This way, people will see that we are not forcing them to anything, but they can integrate with us.” 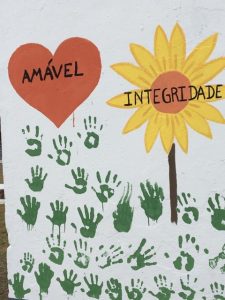 Raquel Pereira, wife of the former district superintendent of Portugal, helped Flávio in preparing the proposal to create UCMM. They wanted to name it after One Heart Many Hands, a U.S.-based Nazarene compassionate ministry, which often conducts large community service projects in conjunction with the global denomination’s General Assembly every four years. Raquel and Flávio sent an email to One Heart Many Hands, asking for authorization to use the same name in Portugal. One Heart Many Hands indicated that UCMM had captured its vision, and gave its approval to the District.
The first UCMM mission trip took place in 2014 to the church in Oporto. The local church had a project in mind and as a district they came together to give it a start. The second trip was in 2015 with the church of Queluz. They helped the church become more appealing to the eye by doing some work with the walls. Other small projects were also done at the Lisbon church.