“paXan” Team of German young adults performs “Week of the Knights” for children in Sighişoara, Romania 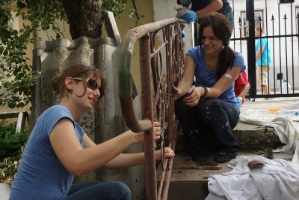 Sighişoara: a picturesque little town in the Romanian part of Transylvania, established in the twelfth century by German immigrants. Even today, many local children attend a German school. High above the river lies the "citadel", the town’s historical centre and the ideal location for a real German "Ritterwoche" – a "Week of the Knights".

The name "paXan" is derived from "pax" (Latin: peace) and "Pack’s an!" (German for "Go do it!" or "Get active!"). So every afternoon the young people got very active at the local Nazarene church in Sighişoara. They did plastering and painting work on the church’s exterior wall, painted the gate and cleaned out a lot of rubbish for more rooms to be renovated.

The local Nazarenes were very grateful for the good work of the team, which "made the church entrance look much more inviting", Roberta Bustin, a Nazarene volunteer living in Sighişoara, said.

But paXan teams are not just known for "getting active" and leaving behind shiny buildings and freshly painted walls. One of the young adults’ primary goals is to build relationships, share peace and hope, spend time with the local people and show them that they are valued and loved.

This is also why programs for children and youth are always an important part of these trips. 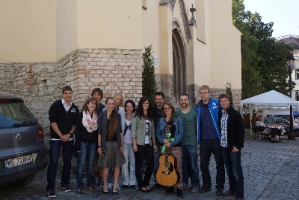 During this paXan trip, the town’s children assembled every morning on the square in front of "The House on the Rock", which houses an international café and several classrooms and serves as the administrative centre of the Veritas Foundation. Veritas is a Christian organization that offers services to the community, a variety of educational programs, and intercultural exchange.

Appropriate to the medieval setting in Sighişoara’s citadel, the team had planned a "Ritterwoche" with the "armour of God" as the main theme. From 9am to 1pm every day the children enjoyed a VBS-type program with a variety of "knightly" activities highlighting the armour of God and the weapons of His spirit. Activities included drawing and themed crafts (such as tiny egg-spoon knights dressed in the armour of God), stories, skits, and lots of games and fun.

The children, but the parents too, were enthusiastic. "This is the first holiday program that my child begs to be allowed to go to every day!" one mother was happy to report.

But not just the children enjoyed the "Ritterwoche". "I really enjoyed all of it – but especially the kids’ program", said David Paul, who was part of a paXan team for the first time this year. "Whatever you put into it, the kids return it to you many times over!"

The paXan team was also able to minister to children in the village of Ţigmandru and to teenagers in a Roma community just outside Sighişoara. Especially the Roma youth, who face great poverty and hopelessness, really enjoyed spending time with the German young adults.

"The German team was a tremendous blessing to all of us", said Bustin, who spent most of the week with the team. "They were able to minister to both middle class children, a group with great potential but a group which is often neglected in the Romanian culture, and very poor Roma children from a nearby village. This team was a great example of giving of themselves and their talents, of sharing, of enjoying each other, and of showing the love of Christ wherever they went."

The ministry trip was also a great experience for the young adults, with lots of new impressions and a lot of fun. Every day was started with a team devotional and in the evenings the team met for feedback sessions, to review the day, make plans for the following day and pray together.

"The week turned out totally different than I’d expected", said Christian Bangert, who has participated in three paXan teams so far. "But it was a tremendous time. Everybody really jelled as a team and together we were able to accomplish a lot of things."