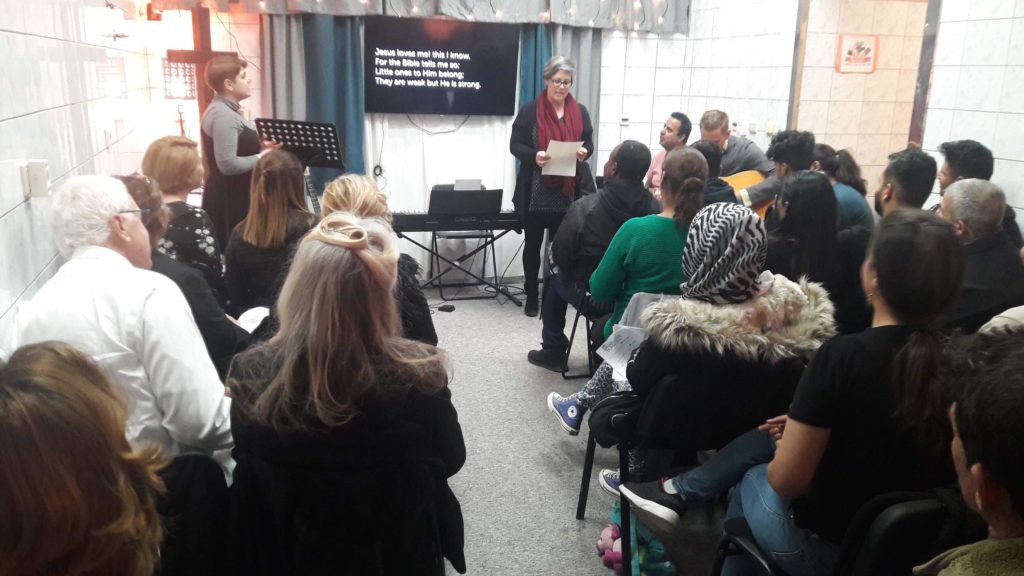 Rania* was just a teenager when her mom died while protecting Rania and her three sisters.

In Palestinian territory, Rania’s family owned a large house and villa right on the border with Israel.

In 2007, a militant group moved into their neighborhood, using the civilian properties as a base for firing missiles into Israel. The Israeli army discovered where the rockets were coming from, and returned fire.

One night, members of the militant group barged into Rania’s house. They demanded that Rania’s mother, a well-known TV journalist, come to the property where they were pinned down by the missiles and gunfire to bring them some of her clothes. They wanted to disguise themselves as women to escape the army’s onslaught. To follow their demands, she would have to walk right into the crossfire. She and her husband refused to help them.

So the militants threatened the family.

So her mother agreed to do the task.

“We knew right away she would not come back.”

Up until this moment in the interview, Rania, a young, attractive woman with a quick, bright smile, has told her story without emotion. But now she pauses to contain her tears, as the memory of losing her mother so violently remains deeply upsetting to her. Once she has regained a calm, she continues to explain that after her mother was killed, her father fled with the girls to a country in north Africa, where they tried to start life over without their mother.

That’s how Rania became a refugee the first time.

She grew into young adulthood and went to university there, married and became pregnant.

In 2017, Rania and her husband began a circuitous journey to Europe, starting first in Egypt. Rania was seven months pregnant when they reached Turkey and paid a smuggler to ferry them to Greece in a rubber boat.

As they neared Greece, snipers she believes were in Turkey opened fire on the boat, which was still in Turkish waters. A smuggler screamed to the snipers that a pregnant woman was in the boat. They also shouted for help to the international police who were nearby, but the police shouted back that they couldn’t help until the boat crossed into international water. Try to reach the international water, they urged.

As the gunfire continued, Rania and her husband were thrown into the sea. Rania didn’t know how to swim. She struggled to keep her head above water.

Someone threw ropes to them, and hauled them back into the boat. But she was bleeding.

Failing to reach Greece safely, the boat returned to Turkey where Rania was hospitalized, had surgery, and gave birth to their son.

The entire incident still sparks anxiety in Rania, whenever she remembers it.

She remained in the hospital for 10 days, but after she was released, they tried again to reach Greece. They made it, but after they arrived, Rania’s womb became infected, and their infant fell ill. The Red Cross moved the family to Austria.

Her family lived there for a year. Gifted with language, very quickly Rania became conversationally fluent in German, the official language spoken in Austria. As European countries have shifted asylum-seekers from one place to another, Rania’s family eventually were moved to Zagreb, the capital city of Croatia. The government housed them in a large hotel repurposed for asylum seekers waiting for official permission and documents to permanently settle in the country.

While living in the refugee center, Rania met an Arabic-speaking couple who are also refugees, and are leaders in the Nazarene church in Zagreb. The wife sat with Rania and listened to her story. They became friends.

“Since the moment I came to Croatia, she is my only friend,” Rania says.

After many visits together, the woman invited Rania to visit the church with her so she could meet other people and make more friends. Rania, who follows her culture’s traditional faith, said she felt welcome at the church. She attended the English classes offered at the church’s community center, called The Hub.

Rania’s husband was desperate to return to northern Europe. But Rania was so exhausted by the frequent relocations, she didn’t feel she had the strength to travel and start over once again. She wanted to remain in Croatia and try to make a life there.

“She decided not to go with him, and boldly decided to stay and raise her son by herself in a foreign country,” said Betsy Scott, Nazarene missionary in Zagreb, who is co-leading the church with her husband, Dave. “She called the ministers, and the minister told her that we would be by her side.”

Friends from her traditional faith pressured her not to mix with people from the Nazarene church. Although her husband now lives in another European country, he threatened her when she spent time with Christians. Afraid, she stopped attending the gatherings or engaging in the friendships for a long period.

About a month ago, she was drawn back to the Nazarene church. She shook off her fears and re-engaged with the group and activities.

“When I was preaching on Easter, I looked at Rania, and she was listening so intently to the resurrection story. She keeps coming back to church,” Betsy said. “Our church has become a place of belonging, a home, a community for people – broken people; people separated from their families; those experiencing loss due to their asylum-seeking journey. They feel safe and cared for. They have a family. We welcome Rania and [her son] as though they are one of our own.”

When asked where Rania has seen God with her in her journey, she responds: “I saw him the most in the sea, because it was a miracle for me to survive with my kid.”

Having studied accounting, she is looking for a job in Zagreb. And she tries to fill her time with things she enjoys doing.
“I have a lot of hobbies and I am talented in many things. I’m a good cook. I can make Capsa (a rice dish) and marinated chicken and meat. Cheese pizza. And the sweets. I challenge anyone with the sweets,” she says, grinning.

Recently, Rania was able to move out of the refugee center and into an apartment with her child. She fights to remain positive and strong for him.

“Good things are coming and I have to be strong,” she says. “Because if I’m not strong, my son will be weak. I will look for good and I will find good. I will not surrender easy.”

This article was previously published in the May 2019 edition of Where Worlds Meet.