That was a recurring theme of Dare 2 Dream, the second conference of its kind for the Nazarene church in the United Kingdom, held in Paisley, Scotland, 17-19 March. 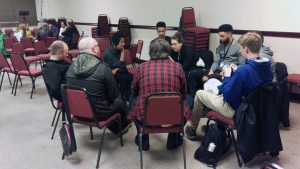 Except in this context, the metaphor used by one participant to sum up the message she was hearing took on an unusual meaning: tearing down the church walls that often separate believers from their surrounding community.

With speakers ranging from local U.K. Nazarene pastors to leaders of evangelical non-profits, and including keynote speaker missiologist Alan Hirsch, all seemed to echo the same urgent call to Nazarenes across England, Wales, Scotland and Ireland: Get outside of the church building and serve your community.

National leaders who planned Dare 2 Dream felt the need behind it was so great that for the first time in decades they brought both national districts together for a rare, and shortened, combined district assembly, which lasted only a few hours on Friday morning. The rest of the weekend was given over to the conference, and concluded with ordinations. More than 200 people attended.

“There is no doubt that the church is at a crossroads in Northern Europe,” said Arthur Snijders, director for the Eurasia Region, of which the United Kingdom is a part. “The decision to limit business time in order to have time to reimagine the mission of the church in British society was a healthy example of letting go in order to get a hold of something new.” 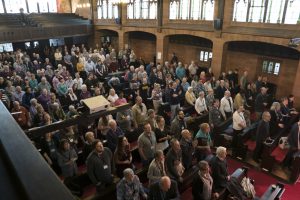 Dare 2 Dream challenged individuals and local churches alike to embrace a missional, pioneering spirit regarding their nation and local communities; to imagine creative, fresh ways for sharing God’s love with the people in their spheres of influence.

“It seemed to be more a call to see the direction of travel and to walk with it,” said David Montgomery, district superintendent for the British Isles South. “It’s this change of mindset that is needed. The world has changed, and the church needs to change in order for its message to be received. This applies to both districts, we need to be in our communities and engaged with people.”

For many, the message came through loud and clear.

Marcia Shields is a family lawyer who primarily works with families in which the children have been removed or threatened to be removed due to allegations of harm, neglect or substance abuse. The conference title, “Dare 2 Dream” drew her to attend.
“I’ve had a dream for a while which I have put on the backburner and really did not pursue that dream,” she said. “My dream was something God had given me from Jeremiah 33:6-9, a beautiful promise of restoration for families, and peace and security for them, and for the glory to go to God. That had been my dream.”
However, because of busyness and distractions, Shields had put her dream aside. 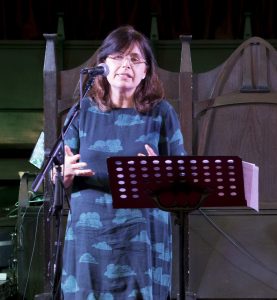 “The first video I saw this morning encouraged me [that] we can trust God, and He’s given us a reason to trust Him to fulfill the dreams He’s given us, and that encouraged me. I am daring to pursue that and step out of the security and safety I’m in at the moment. I’m trusting God.”

That message of tearing down walls that sometimes separate churches from their communities seemed to reaffirm to Nicole Alker what her leadership is already discussing at Leeds South Church of the Nazarene, she said. The church has a café inside the building, but Alker says they’ve begun talking about taking the café outside the church to some other location in the community.

“There’s a general vibe about getting out there to the community and becoming Christ to people,” Alker said. “Go to them instead of sitting in the building and expecting them to come to you. It’s already along the lines of what we’re trying to do.”

A number of Nazarene leaders shared stories of how God had moved them into new relationships and ministries when they became open to seeing where God was already at work.

Ruth Turner, pastor of Millbrook Church of the Nazarene, shared that initially her church plant met in a theater in Larne, Northern Ireland, and the small congregation was proud that their location seemed forward thinking. But then God drew their attention to a neighborhood of 300 homes in Millbrook where there was no church, and they realized God wanted them to relocate there.

After moving the church, Turner was walking through the neighborhood and met a disabled man. She invited him to church, but he objected, pointing out that churches always want people to come to them.

“Why don’t you ever turn up where I am?” he challenged.

Turner learned that the man was an avid bowler, so she started to go bowling with him and his friends. Now the man is a regular attender at the church.

The stories served to give participants ideas to build upon regarding their own communities, or questions to ask themselves.

“It was really encouraging for me to have many from my congregation gathered together to hear teaching on missional thinking,” said Pastor Carl McCann, of the Ashton Church of the Nazarene. “We are having a feedback session for our church delegates towards the end of April and will be working out what will happen as a result of the conference within the Ashton church.”

Alan Hirsch’s teaching on how to conduct discipleship has made McCann rethink the way it is done in Ashton.

Hirsch said that today in Western cultures, people read books, study together and attend conferences to learn how to be disciples. The model is based on the premise that new ideas and new thinking will lead to changed behavior. However, so often behavior does not change. Jesus’ model was opposite, in which first he took his disciples with him to do ministry. Often they didn’t really understand what they were doing or why, but gradually, understanding and new thinking came as a result of their changed behaviors and actions.

“Abraham couldn’t move to the promised land without leaving the old,” said Snijders. “The challenge will be: how to follow up and implement what was discussed? So I am looking forward to the assemblies of next year.”