The child who shouldn’t have walked

The child who shouldn’t have walked 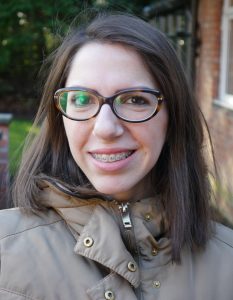 Muna’s story is one of God’s grace since before her birth, and how He is using her to share His hope with the hopeless.

Amman, Jordan — When Muna’s mother was pregnant with Muna, she noticed the baby was not kicking like her previous babies had. The doctor assured her everything was fine.

When Muna was born, doctors diagnosed her with arthrogryposis, a disease in which the joints are constructed poorly, some muscles and joints may be entirely missing, and the limbs are curved. For Muna, this affected all four of her limbs. One shoulder and hip were detached. Her right knee was twisted to the side, and she had two club feet.

The doctors said she would never walk or live a normal life. They proposed doing some surgeries when she was two months old to try and mitigate the malformations so they wouldn’t get worse while she grew.

Muna’s mother, Majda, is a prayer warrior, and she took their daughter to God. The family asked their church and friends to pray. Her father, Suhail, and Majda also dedicated her to the Lord before her next doctor’s appointment.

Her family did not have the money to pay for the surgeries Muna needed, nor were there any doctors in Jordan who were experienced enough to do them. But they had relatives in Sweden, and one of them met a doctor in passing who had the training to do the surgery. After hearing about Muna, the doctor was willing to perform the surgeries.

But her family did not even have the money to send Muna and her mother to Sweden. So they prayed.

One day, a man approached Muna’s uncle at the family’s shop. The man gave him an envelope from King Hussein. When they opened it, they found the same amount that was needed to travel to Sweden and pay for the surgery. Through a series of connections, the king had heard about Muna and wanted to help.

In Sweden, a special team of doctors began the surgeries and treatments. The doctors cautioned that Muna’s legs were missing entire muscles and said she would never walk.

So her family prayed. A few weeks later, the doctor noticed the baby moving her leg that was inside a cast from hip to ankle. The doctor revised the prediction: the child might walk someday, but only with technological assistance, not on her own. 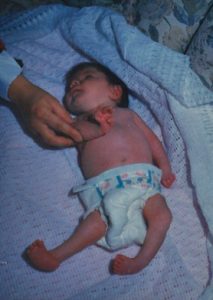 Muna’s sister, who was 9 years old at the time, called their mother from Jordan and said she’d had a dream. Jesus had told her that Muna would have no more surgeries. In Sweden, Muna’s mother was sleeping in a darkened room when she saw a vision of Jesus, so bright she couldn’t look directly. He walked through the room toward the bed where the baby lay. Then He was gone.

Muna began to move her arm.

When they returned to the doctors, her mother insisted that they do new X-rays. So they agreed, and when they put the new X-rays against the previous ones, they saw that in the first films there was a gap due to the detachment of the joint. In the second one, the joint was attached.

The doctors put a halt to the surgeries for that time, suggesting she may need some when she was older, and the family returned to Jordan. Muna, who is now 24, has not had any more surgeries, just physical therapy. She also has use of all four limbs, and can walk without assistance of any device, although with difficulty.

Specialists also said that the muscles in her tongue were weak and she would not be able to speak normally. When she was three, she began speaking. Her first word was “hallelujah.” Today she is fluent in both Arabic and English.

Many more miracles occurred throughout her life, including acceptance and full scholarship to an accounting program at one of the best universities in Jordan. She graduated in 2015 with a distinction grade of 86.3 percent.

In 2013, Muna yearned to be closer to God and understand His plans for her future, so she went on a prayer retreat in Egypt. During prayer, she saw a vision of Jesus walking with her through streets and buildings surfaced in gold. But when they entered a room, it was filled with desperate, tired and homeless people. Jesus commanded her to change the people’s torn and dirty clothes. So she helped them change into bright, clean, white clothes. Then she saw the people eating at a table with Jesus because she had prepared them to enter heaven and join the feast of the Lamb.

“We entered (me and Jesus) [and] I saw another room. I saw a lady laying down on a bed (as if we were in the intensive care unit), and Jesus ordered me to tell her to wake up. At that time I understood my ministry will be dedicated to compassionate and healing ministry.”

When she prayed about where she should start, she remembered Pastor Khalil, a Nazarene pastor in Amman, and also saw an image of another man of God.

After she returned home, Khalil told her that the church was initiating a ministry for Syrian refugees and he felt God wanted him to invite her to join them.  She recognized this as confirmation from God.

For a year and a half, Muna served in the church’s team of volunteers who visit refugees in their homes every week, and also helped with a discipleship group of 7th and 8th graders at the church.

The church serves 600 Syrian families and about 250 Iraqi families in the area. The volunteers deliver hygiene items, and spend time with them, building relationships and hearing their stories.

“The ministry is all about love and showing them that kind of love can change their lives,” Muna said. The ministry shows “them they are accepted in Jordan. Lots of them as refugees feel shame. They feel rejected from this place. Once they felt [our] love, I believe they will touch the love of the Lord.”

“I remember there was a woman who came to our church with a 10-year-old sick boy. There was liquid on his brain. I remember because of that liquid and the physical damage, he was about to lose his sight. And all his body, the legs, are becoming filled with water.”

Although the woman was not a believer, in desperation she brought her son to the church for prayer.  More than two months later, the woman was regularly attending a meeting for refugees, and she stood up to tell the group her son had been miraculously healed and that now she was following Jesus.

“We say, ‘Even if you decide not to follow Jesus, we still love you. It’s not conditional love,’” Muna said. “‘We care for you as a human as God cares for you.’”

Because of the emotional struggles of the refugees who have been traumatized by the wars in their countries, Muna is now studying for her Master of Arts in Theology, in the Compassionate Ministry Stream at Nazarene Theological College in Manchester, U.K., and is also training to be a relational needs coach.

Muna looks back at her vision of the tired and weary people whose dirty clothes she changed for clean clothes, and believes this represents the refugees she is serving.

“My goal is to bring hope to the hopeless and to show the love that changes.”