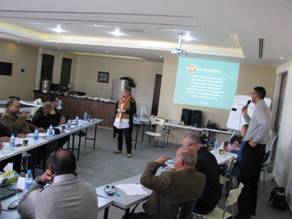 Overwhelmed with the sheer numbers of Syrian refugees into Jordan, the churches of the Nazarene in Jordan have been collecting food, clothes and household items, and systematically delivering the items to registered families on their lists.

However, at a disaster management and preparedness training held in March by Nazarene Compassionate Ministries for the Eastern Mediterranean Field, Zaki Kopti, a local leader in Jordan, said that his refugee ministry team learned they needed to be spending more time with the families they’re ministering to. Rather than dropping off the goods, saying a few words and a prayer and leaving, the team can pour themselves into relationship with the families who have been uprooted by war in their own country.

“Through this we can start talking to them and also to respect them, even though they are very poor, to work with them, to show love and pray with them and cry with them,” Kopti said “Not only to give them help and that’s all, but to show them real love from God.”

This was one of the principles that the training instructor, Kate Bowen-Evans taught through the training: that local churches are uniquely positioned – much more than many non-government aid agencies (NGOs) – to provide long-term, relational assistance to refugees.

“The skill that many church staff have is a very relational and postural skill and those are specific skills that other agencies don’t bring,” Bowen-Evans said. “[Other agencies] have big money, big intervention, but are very low on personal relationship and low on longevity. That’s a real strength of the church-based response.”

She said that since local churches understand their culture, and have a long-term presence in a community, the church can engage in rebuilding-type of ministries that NGOs are less equipped to handle. For instance, there are four Nazarene schools in the Middle East that are serving refugee children, and several Nazarene churches offer after-school and weekend educational programs for refugee children.

There were 20 participants in the training, representing Nazarene ministries to refugees in Jordan, Egypt and Lebanon. The churches have been ministering to refugees for 11 years, starting with people fleeing war in Iraq. According to the United Nations High Commissioner for Refugees, 2.5 million Syrians have fled their country in the past three years, most into neighboring countries, and for the past two years the churches have been responding to their desperate needs, as well.

The training was intended to provide the basics of disaster response as well as prompt planning for disaster preparedness across the regions, hopefully leading to an understanding of how to respond with interventions that will increase the long-term resilience of affected communities and reduce the negative impact of any repeat disasters.

The representatives at the training will meet again to draw up plans for their districts to quickly and efficiently organize, assess, and create the right interventions to help their neighbors in the event of a disaster. District leaders will review the plans periodically so that Nazarenes are as prepared as possible to help.

Kate Bowen-Evans is married to Tim Bowen-Evans, who is currently serving as NCM’s International program coordinator. Tim and Kate recently relocated to Ireland after two years living in Jerusalem. Tim served as pastor and leader of the Jerusalem Church of the Nazarene and Kate worked as Oxfam GB’s deputy country director in Jerusalem, managing the West Bank programs, as well as travelling in and out of Gaza.  Before this Kate spent the past decade working mainly for Tearfund in Africa and Afghanistan.