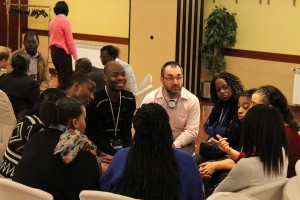 Paris, France — They could have chosen to see it as an obstacle, but they embraced it as an opportunity.

One year ago, in April, the Church of the Nazarene in Paris sold the building in which three different Nazarene congregations had been meeting for years. The transition became a launching point for those congregations to replant their ministries in other parts of the city.

The decision to sell the original space was prompted by ongoing complaints from the surrounding community that the presence of the church brought too much noise and activity to the neighborhood. The building, which was originally a movie theater, was old and needed a lot of work.

The congregations that met in the space included an Arabic-language church, a Haitian church and a church made up of long-time immigrants from other French-speaking islands in the Caribbean.

“We knew God said He will build His church,” said Pastor Fred Marius, who leads the Caribbean islands congregation with his wife, Marie-Odile, both originally from Martinique. “In fact we came to the conclusion why not use this as an opportunity to develop a new vision for the church.”

The church quickly became excited about the opportunity to take the gospel to a new part of Paris.

Numbering about 40, the congregation developed its strategy. Before the property was sold, the leadership designated 10 people from the congregation for training in church planting. Marius also tailored his preaching to help them view the move positively.

The church researched neighborhoods for relocating their church, looking for one that needed the presence of an active, thriving church and where members of the congregation could eventually relocate so as to embed themselves in the community, closer to the needs. Soon they sensed God leading them to a town on the edge of Paris called Fontenay-sous-bois – a community of about 35,000 people with no existing church presence.

The town is naturally divided into two distinct halves; one side is home to wealthy, upper class families while the other side is more multicultural with numerous socio-economic challenges. It started as an industrial town that is being slowly enveloped by the surrounding suburbs of Paris.

The church found an event hall in Fontenay-sous-bois that they have rented for Sunday activities. Every Sunday morning they arrive early to clean up any trash and bottles left behind by whoever rented the space the night before. Then they set up for the worship service.

In addition, the congregation has formed three weekly small groups in members’ homes, with plans to develop more.  The objective is to “have fellowship exchanges among ourselves but also to help the church get out of a central location and start reaching people around them,” Marius said.

The small groups effectively create miniature communities of the church in homes – nonthreatening places to which they can invite new people who are unfamiliar with or resistant to church. Eventually, the vision is that these home groups would become new missions in the church members’ own neighborhoods. Marius said that one aspect of church attendance in France is that people often attend churches far outside the communities where they live, which can limit involvement in any other activities that occur on weekdays or weeknights, such as women’s groups, Bible studies, children’s activities, youth group and the like.

As the congregation gets established in its new community, their plan is to begin partnering with local organizations that are already trying to meet needs, thereby accomplishing the dual goal of learning what the challenges are for people living in Fontenay-sous-bois while gaining exposure for the presence of their church.

“We have this idea we have to go and pull them into the life of the church, but we really need to go where they are and live rather than pull them to where we are,” Marius said.

Moving the Paris church and developing a vision to grow is positively reshaping the culture of the congregation members, whose long-time understanding of what it means to be a Christian includes only having Christian friends, and not associating with people who don’t follow Jesus, according to Brian Ketchum, a missionary to France who has been supporting the national leadership of the Nazarene church in France.

The native French culture also dictates that religious issues are deeply private for individuals, and thus asking about a person’s religion or spiritual beliefs is not welcome, further making it difficult for Christians to discuss spiritual matters with friends or acquaintances who are not Christian, Ketchum said.

“This fear has rendered them incapable to bridge that gap and ask questions and invite people,” Marius said. “Before you can even be interested whether or not they come to church you have to show interest in them as a person. Not the mentality of taking the programs or activities of the church and throwing them at people but going and developing relationship…. We go and live with them before we suggest an event.”