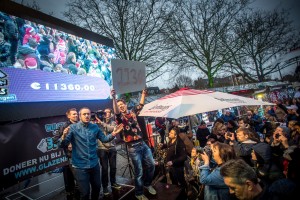 The youth group of the Vlaardingen, Netherlands, Church of the Nazarene took their Internet talk show into the city 11-12 December, when they broadcast for 24 hours from the main square, cooperating with the community to raise more than 11,000 euros for a national Red Cross fundraising drive.

The event – which got the congregation outside the walls of the building and into contact with people in the city – raised the profile of the church, which hopefully will lead some to visit in the future.

Xperience TV debuted in November 2014. The one-hour, monthly, live show is filmed inside the Vlaardingen church, written and produced by the youth group, who also work as cast and crew. Depending on the topic featured, anywhere between 500 and 10,000 viewers stream the show on their Internet channel. 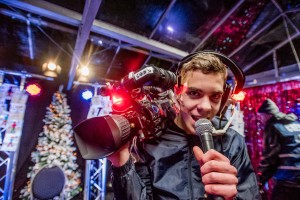 The idea behind Xperience was for the church’s youth to develop their skills and talents while reaching unchurched youth in a culturally appropriate way. Viewers are invited to visit the studio and even help with production. This allows them to come into contact with the youth group members and feel comfortable inside the church.

“We see new people coming to our studio every month. Since we’ve started Xperience TV one year ago, we’ve seen our youth group double itself! The most interesting thing is that we didn’t just find a way to get our own young people enthusiastic, but also regularly see young people who don’t know Jesus at all. Some don’t even have a clue they’re entering a church, but somehow get touched by the nice atmosphere, and the fact that they are fully accepted how they are.”

A few months ago, the youth decided to participate in the annual, nation-wide fundraising effort called Serious Request, for the Red Cross in the Netherlands. The event raises money for “silent disasters,” which this year is focused on young people seeking education in war-torn areas.

A big radio station pioneered the fundraiser in 2004 by setting up a glass structure and locking its DJs inside where they would host a live program while not eating anything.

The church’s youth wanted to do their own version of the glass house for Serious Request.

At first, the plan was to put the glass house on the church’s parking lot and do the live broadcast independently. But a local entrepreneur whom they consulted for advice said they weren’t thinking big enough.

The final outcome was that they were invited by the city to put the glass house on the city square, in conjunction with the city’s Christmas market. Excited by the vision, more than 100 volunteers, both from the church and from without, signed up to help with the massive endeavor. 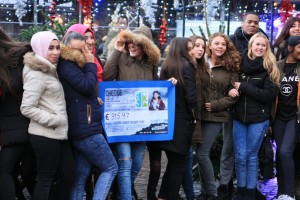 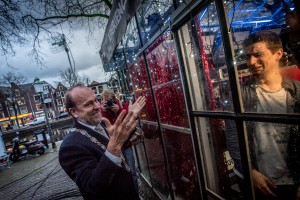 On 11 December, at 4 p.m., in front of a large crowd, the Vlaardingen city mayor ceremonially locked the DJs and presenters inside the glass house. The Vlaardingen youth group ran the cameras, sound and other technology.

During the next 24 hours, individuals dropped off donations. Several schools presented checks for as much as 800 or 1000 euros which they had raised in the days leading up to the fundraiser.

At one point, a scouting group and an ill-reputed motorcycle gang both converged on the square to drop off checks, presenting quite a contrast – but also the spirit generated by the Vlaardingen church’s call for everyone to work together in stopping silent disasters. 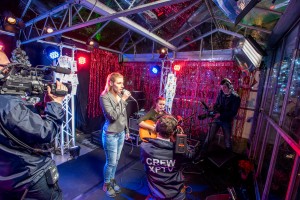 The program also included interviews with musical artists and bands, funny challenges, a “dance cam” and games. On Saturday morning, the volunteers distributed to several homes for the elderly to serve a special breakfast.

At 4 p.m. on Saturday, the group tallied all the donations and celebrated with the gathered crowd that together they had raised 11,360 euros. 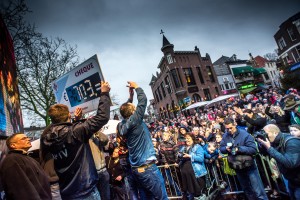 “I started to get emotional,” said Freek Bahlman, one of the Xperience presenters inside the glass house. “We got out of the house and got onto a small stage before this big screen, and the whole square was filled with people. Keep in mind that we did this for the first year, so not a lot of people knew if this would be a success. So, yeah, that was really special.”

“This project started as a youth project but it somehow evolved into a church project,” said van der Zeijden. “So in a way I do think the youth influenced the church.”