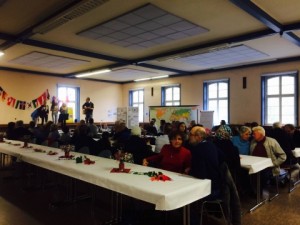 Many refugees into Europe come from cultures that place great value hospitality, so there could be no greater expression of love and welcome than the community hosting a big meal for their new neighbors.

That’s exactly what happened 17 October, when a network of churches and organizations in Gottmadingen, Germany, including the Nazarene church, welcomed 60 refugees to their community by hosting a banquet with international dishes, live music, cultural presentations and plenty of conversation.

The refugees were resettled in Gottmadingen – a town of about 10,000 people – by the German government. 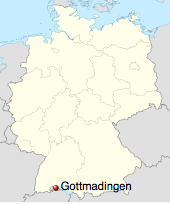 The banquet was carefully thought out to express welcome as well as build mutual understanding. By highlighting many different cultures through music, dancing, speeches and food, the community sent the message that the new neighbors would enrich the community with their cultures. Additionally, long-time residents who had once immigrated from Italy, France, Portugal and Turkey were on hand to share about their experiences, tips and knowledge about adjusting to the culture after having lived in Germany for many years.

The night was also designed to help Gottmadingen understand a bit more about their new neighbors.

“The refugees gave testimony of where they came from and there was a big map of the world and they showed the places where they had gone through to reach Germany,” said Ludwig Duncker, pastor of the Gottmadingen Church of the Nazarene. “There were several activities to show the local people what the refugees had experienced.”

With 200 in attendance, the six-hour banquet was just the beginning.

The “social network,” which the informal group of churches and nonprofits call themselves, has assigned about 20 volunteers – including some Nazarenes – to journey alongside “adopted” refugee families. These volunteers will help to answer questions, and teach them systems like public transportation, government services, schools, how to sort their trash for pick up, and the like. They are also available for relational and emotional support, said Duncker.

Duncker has volunteered to assist a Syrian family with five children. They’ve been on a difficult journey to reach safety. The couple lost their parents during the conflict in Syria. The husband was, at one point, kidnapped. They took passage in a boat to reach Europe, but the boat’s engine broke down part-way. In any case, they made it to Germany and are now trying to figure out life in a new culture and language.

“They had a terrible journey to come here to Germany, and they are so thankful and they are so positive and take the opportunity to learn German and to get integrated here in our area,” he said. “It touches the heart to know what they have gone through and how they want to establish a new life for their family.”

This family’s journey is multiplied exponentially, as thousands of refugees and economic migrants are entering Germany every day. The German government is requiring every town and village in the nation to take in a quota of refugees each year. Gottmadingen will take 140 refugees by the end of this year, according to Duncker.

The local government furnishes housing, and works closely with the social network to make sure the new neighbors are being settled in ways sensitive to their needs.

Duncker said that everyone is working hard to ensure the new families are not all put together in one apartment building or area, but to distribute them throughout the community. That way they get to know the local German families around them and integrate into the culture more quickly.

The new families aren’t all from Syria. They also hail from Bulgaria, Africa and India, he added.

In nearby Büsingen, Uwe Burmeister, a member of the Gottmadingen church, is checking in on a young Iraqi refugee who fled his country alone because of threats on his life due to his faith. Burmeister helps him practice German and inquires about his needs.

Burmeister is the Gottmadingen church’s liaison with the town’s social network, which formed about five years ago with the idea of helping financially struggling people, the disabled, and providing support for local schools. The Nazarene church joined three years ago, which has gone a long way to help build trust with the other free and state churches in town, as well as non-religious organizations, as they have worked side by side toward common goals of improving their society.

Going forward, the local churches are talking of opening an international café together, where refugees and long-time residents can meet for fellowship, to practice German and get to know each other, Duncker said.

“Some refugees comment that the Germans are very efficient in solving problems, but what they need is also the human aspect – that people accept them and love them and listen to their story.”

The café would make space for the churches to meet those needs.

“The love of God drives us,” he said. “This is a really great challenge, and a great opportunity for the Christian church in general. These people come to us now, and on a very personal level and human level we can share what it really means to be a Christian.”