Home/News/SnapShots/10,000 receive assistance after Bangladesh ravaged by flood
Previous Next 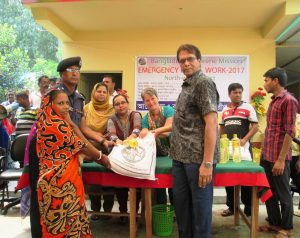 “The monsoon flood destroyed my home. Now I don’t have a bedroom. I stay on the road side,” said Nazmul*, 60, who lives in northern Bangladesh.

Nazmul was one of 10,000 people who received assistance from Bangladesh Nazarene Mission (BNM), the compassionate ministries arm of the Church of the Nazarene in Bangladesh, following historic flooding in late August and early September that affected more than 40 million people, killing 1,500 people across Nepal, India and Bangladesh. More than 30 percent of Bangladesh, a low-lying country, was flooded.

Nazmul lives with his wife, Orpita*. Without land of their own for raising crops, they live hand-to-mouth, with Nazmul working as a day laborer. He has no resources to repair his house. The man has three sons who live separately with their families.

The couple are among those who received rice, legumes, potatoes, salt, oil and packets of oral saline from NCM International, and soap from an organization called Changing Lives, founded by a Nazarene family in the Netherlands.

“Nobody gave me any help after the flood destroyed my house, but BNM came forward and I am thankful to them,” Nazmul said. Pointing to the packet that he received from BNM as aid, he added, “This food will help me for 10 days to fulfill my family needs. It is a big support for me.”

Nazmul and Orpita informed BNM workers that, like them, many others also lost their only houses and now live under open sky. They urgently need some financial support for repairs.

“Aid that was given by BNM has removed my suffering. Now I will sell my labor and will buy some goods to repair my house,” Nazmul said.

Panchali*, 20, came with her two-month-old child to the nearest Church of the Nazarene, in northern Bangladesh to receive help. Her worried face transformed into a smile when she received relief organized in her area by BNM.

Panchali said that after the late August flooding across the country, she and her family members are having a harder time. She has three children. The flood waters destroyed all the food she had carefully stored; her children had already missed three meals.

Her 45-year-old husband is the only breadwinner in their family.

“During the flood, my two children became sick,” she said. “Now they are underweight and malnourished. BNM comes to us as a blessing with relief to help us.”

The BNM relief program is a blessing for all of them. They all express heartfelt thanks to BNM and its donors. 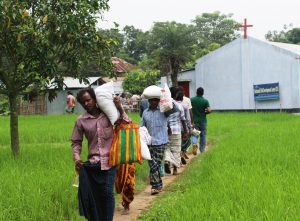 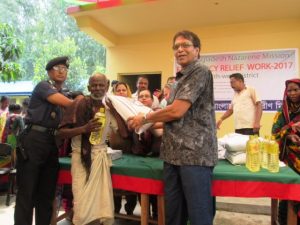 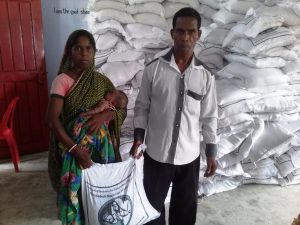 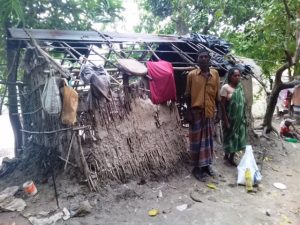 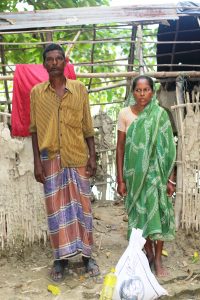