Two Arabic-speaking Nazarene churches have been planted in Poland after a Nazarene family took refuge from the Syrian civil war in Poznan.

‘This is what I’m looking for’ 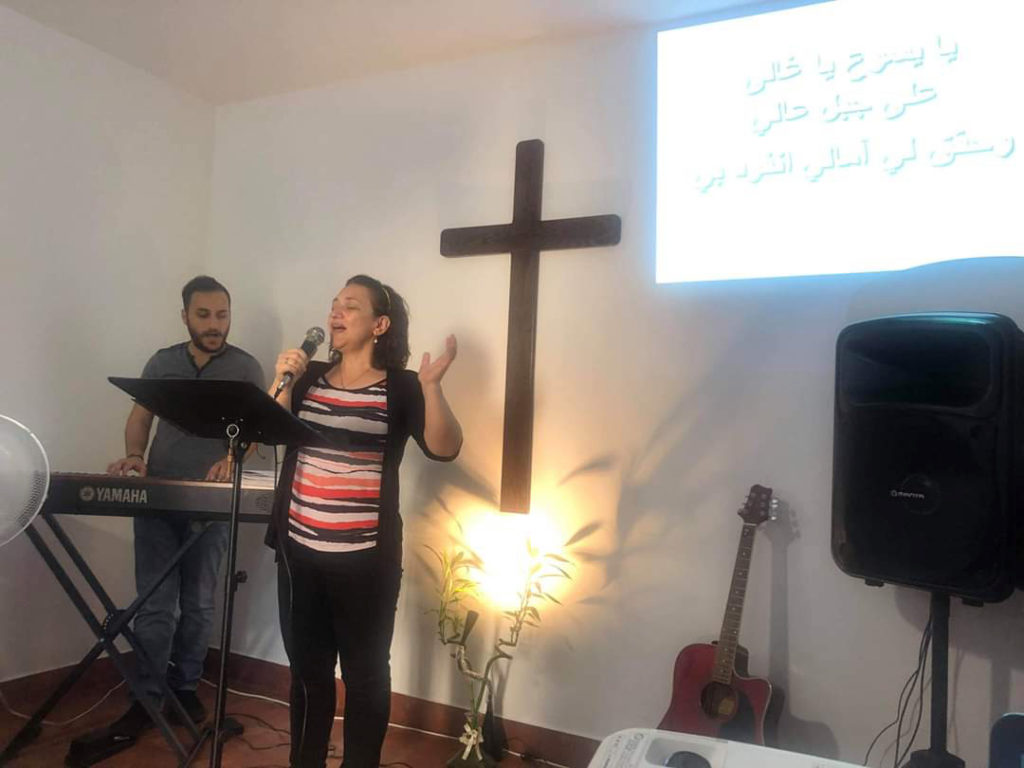 Back in Syria, Lena and her family originally worshipped God in a Catholic church, where Lena developed a deep love for God and joy in knowing Him.

“Since I was young, I loved Jesus so much. I had a relationship with Him,” Lena said.

In 2005, Lena joined the teaching staff at the Nazarene primary school in her city. The pastor who worked in the school invited Lena to attend a Sunday service at the Nazarene church. The teaching she heard there helped to deepen her understanding of, and relationship with, God.

“I saw that this is what I’m looking for,” she recalls. “I wanted this, so I started to come. My sons also came with me.”

Lena and her husband, Nidal, have two sons: Rafi and Wadi. The young men loved attending the church. The family joined a Bible study, volunteered in various ministries, and became members. Rafi played the piano for worship.

God’s care in the midst of war

When the civil war began, their city was spared much of the fighting. Rafi continued working at a fast food restaurant, Lena still taught at the school, and church life went on as usual. But even so, sometimes bombs fell in the city.

One day, Lena was at the church when Rafi stumbled into the building covered in soot and debris, his clothing torn. Lena screamed in fear until Rafi assured her he was unhurt.

“Mom, I’m good, nothing happened to me,” he insisted. He had been at his job to open the fast food shop when a bomb exploded nearby.

On another day, Rafi and Wadi were on their way to the church to practice music for the Sunday service when bombs began to rain down on the neighborhood. Every meter another fell as they raced to the church for shelter.

The closest bombing happened across from their home. Lena had already left for work at school but her sons were still in bed. A rocket fell on the building opposite their home, causing a deafening explosion and rocking their house.

“When I opened my eyes, I thought, ‘I will not see my brother or anything. I will be in heaven,’” Rafi recalled. But both young men were safe and unharmed yet again.

Lena said the family lived with constant stress caused by the threat of recurring attacks.

“We were not afraid, because we know God will protect us and provide everything for us. But, when you heard a lot of bombs or see a lot of things, you always feel stressed.”

Refugees from the harder-hit areas poured into the city. The church began a ministry providing food, clothes, household supplies, and heating in the winter. Church members visited families to comfort them, listen to their stories, pray for those who were willing, and help them resettle in the city. They ministered to everyone, regardless of their religion or ethnicity. Some chose to visit the Nazarene church and some gave their lives to Christ. 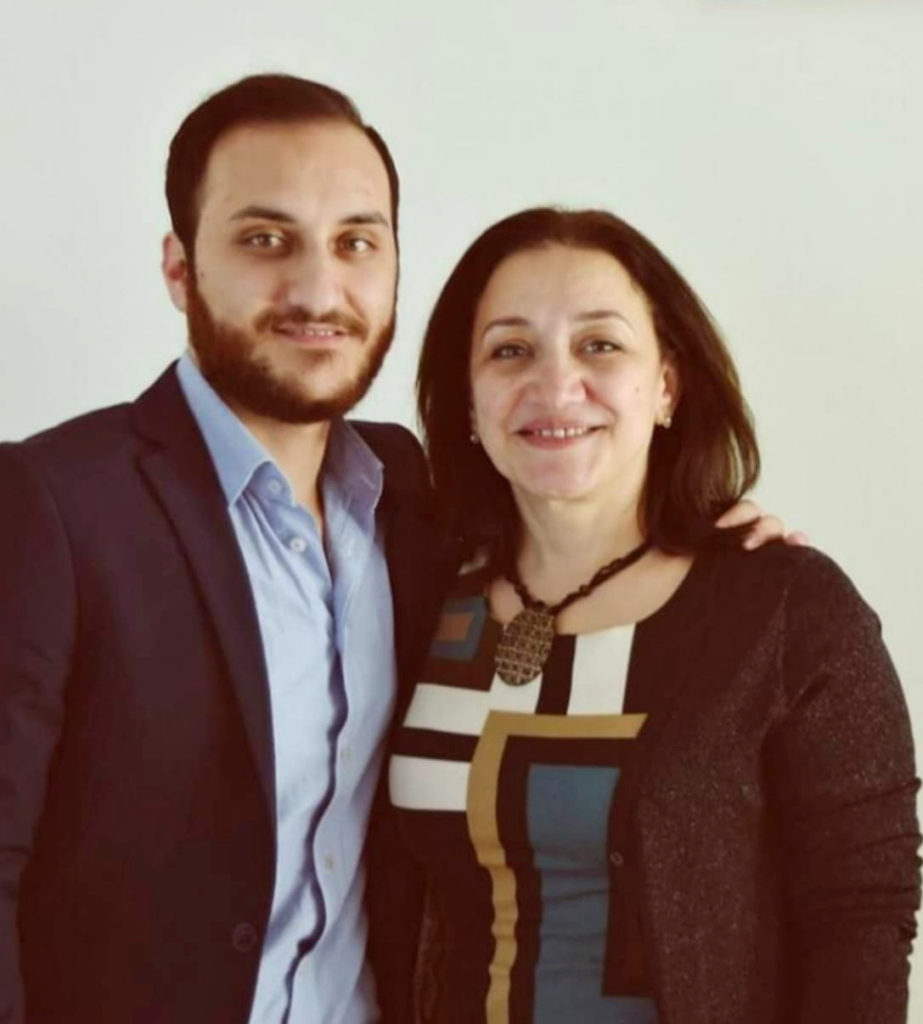 When the stress of the bombing became too much, Lena and Nidal decided it was time to leave the country, taking Rafi with them. Wadi stayed behind with his family and settled in another city. Later, Wadi became a pastor, and now leads a Nazarene church there.

Nidal and Lena’s journey took them to Poland, where Lena’s brother lived. Compared with the millions who apply for asylum in Western European countries, only about 100 to 300 people have applied for asylum in Poland each year since the Syrian conflict began. Most who travel to Poland continue on to Western Europe.

Sometime after the family first arrived, they believed their time in Poland would be temporary, that when the war ended they could return home. While they waited for their asylum papers to be processed, Nazarene missionaries in Poznan heard the family was there. They went to visit them, and soon after the family began attending the Nazarene services there.

“We came to Poland with about 150 people,” Rafi said. “Most of them have gone to Germany. But we decided to stay here because God sent us here. He wants us here. He has a plan for us here.”

Lena and Rafi wanted to study theology. They discovered that Rafi could remotely enroll in Arabic Nazarene Bible College, and learn in Arabic. Lena studies in the English language through European Nazarene College.

Since coming to Poland, Rafi’s call to ministry has become more clear to him.

“Back in Syria I was thinking about being a pastor, but I didn’t know when,” he said. “After I came to Poland, I saw that God is really calling me to be a pastor. So I talked with [the missionaries], and I asked them to help continue my studies. So, since that time, I have started to work on myself to be a good pastor.”

In 2016, Rafi had the church’s support to invite Arabic-speaking people in the city for a one-day conference to gauge interest in starting an Arabic-language worship service. Twenty people participated. Out of this, Rafi and Lena started an Arabic-speaking church. As it grew, the congregation rented space from a Pentecostal church, then later moved to a Baptist church, which gave them a room free of cost. The Poznan congregation finally has its own rented space, supported through Nazarene Compassionate Ministries.

As the church continued growing, they started a second Arabic-speaking church in Warsaw. Rafi leads worship at one on Saturday and the other one on Sunday.

Before the global pandemic began in March, combined attendance at both locations was about 50 people. Once the pandemic reached Poland, the churches shifted to Zoom meetings and services, rather than in-person worship.

“Our vision is to reach the Arabs here and try to evangelize them,” Rafi said.

Lena said the refugees in Poland have developed a community around their shared culture and language that overcomes religious differences. They have become close friends with people from a variety of faith backgrounds, just as they did in Syria before the civil war.

The Arabic-speaking church has opened doors for sharing God with people, both immigrants and Poles. Once a Polish journalist came to do a video segment about the church. The journalist belongs to another Christian tradition, and was fascinated by the uninhibited ways the Nazarenes praised God, sang, and prayed. Rafi’s sermon about the differences between Judas and Peter, who both denied Christ before Judas ended his own life and Peter repented, has stayed with the man.

“I always remember these words,” the man told Rafi. “I want to be like Peter, not Judas.”

The journalist has developed a relationship with Rafi, Lena, and the church, and continues to visit occasionally, even though he lives a distance of seven hours away.

“He started to study the Bible, and then he had a lot of questions,” Lena said. “He started to share Jesus with people around him. He became a Christian and regularly attends his church.”

Lena also shared Jesus with her Polish language teacher, a woman from Ukraine. Every time they met to study, they would end up talking about Jesus for half an hour. On their last meeting, the woman prayed to receive Jesus. Soon after, she moved away and started a family, but earlier this year she sent Lena a message: “Lena, now I know God like you. I know Him and I have a relationship with Him. I always pray and I learn what you taught me.”

This article was written by Gina Grate Pottenger and previously published in the July 2020 edition of Where Worlds Meet.