Qendressa represents a community of Nazarene believers from a Balkan country where the culture prohibits women from any role of leadership over men. The broader Christian community in her nation numbers only a few thousand and represents a very small minority of the general population. She has only seen a woman preach from the pulpit once, and that individual was an American missionary.

Over the past couple of years, Qendressa has been taking on more ministry roles within her local church. In November, she came to the CALLED: Reimagine conference with a firm belief that scripture allows women only to serve under the leadership of men.

Qendressa was of 153 women and 5 men that journeyed to the Wesleyan Holiness Conference for Women Clergy and Ministry Leaders on the outskirts of Zagreb Croatia. Their influence stretches across 24 countries of the European continent. Some came wrestling with the legitimacy of their call. Others came ready to be challenged and equipped, both academically and practically, for ministry leadership and service. They found intentionally planned opportunities to explore, to deepen, to be equipped, and to broaden their understanding of their call to ministry.

The concept of a Wesleyan Women’s Clergy conference has been evolving for nearly two decades. An initial conference was held in Ireland in 2002, attended predominantly by women from Western Europe. Four years ago, a Nazarene steering committee organized the Women’s Clergy Conference in Sighisoara, Romania. Funded in part by a generous donation from Nazarene Global Clergy Development, 80 women attended the Romania conference, women whose places of service extended even into the Middle East. They were from several Wesleyan Holiness traditions including the Salvation Army, the Wesleyan Church, the Church of the Nazarene and the Methodist Church.

This most recent conference held in Zagreb reflects growth in numerical attendance as well as an expanding cross-denominational cooperation of Wesleyan Holiness churches across Europe.  As these women carve out a theological space within the continent’s broader Christian community,  the conference participants represent faith communities from the Wesleyan Church, the Church of God, the Church of the Nazarene, One Mission Society (OMS), the United Methodists (Russia) and the Anglican Church.  The nine-member steering committee was also intentionally diverse, with a shared leadership from from the Wesleyan Church, the Church of the Nazarene, and OMS. 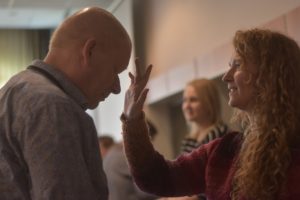 The content of the conference was a determined balance of theology, deliberate theology, and practical skill-building for ministry with thirteen workshops focused under four broad themes of reimagining: the minister, the church, healthy relationships, and theology. The schedule was rounded out with two panel discussions, topical table discussions, devotionals, sermons, and a service of Lament and Reconciliation. The conference closed on Monday morning with Wesleyan Covenant Prayer Stations and Eucharist.

Out of curiosity, Qendressa  attended a workshop led by Dr. Svetlana Khobnya, theologian and Biblical Studies Lecturer at Nazarene Theological College-Manchester (NTC) called Reimagining Theology: Reading Challenging Texts in Light of the Gospel. Khobnya dealt with the biblical interpretations of two verses, 1 Timothy 2:8-15 and 1 Corinthians 14:34-36, that are most often used to prohibit or set limitations on women.  From Russia, Dr. Khobnya understands the strong resistance to women as pastors within the church. Qendressa that says that Khobnya’s workshop was a critical point for her. The tools she gained for careful interpretation of biblical texts have her wondering and wrestling with what obedience to God’s call in her life might mean in the future.

The conference’s interdenominational steering committee hoped that the intentionally broad inclusion of women into the theological conversation would be transformative. The presenters were from a diverse spectrum in terms of ethnicity, geography, age, experience and ministry responsibilities. The attendance list stretched from women who were still exploring their call all the way to women who fulfill the top levels of ordained leadership in their denominations. The result was a healthy environment for exploration, encouragement, and being equipped.

While Qendressa’s experience was dramatic, for others such as Anne from the Republic of Ireland who is serving with OMS, the conference created space where she was encouraged and challenged by the stories and ministries of other women.

Helga, a lay leader in a Ziva Nada (Living Hope) Wesleyan Church Split, Croatia, was surprised by how God challenged her through The Call, a workshop led by Rev. Wilma Holleman, (CotN, Netherlands). Holleman, who co-pastors in Zaanstad, focused her workshop around the assumption that women were already serving in active roles of leadership in their local congregations. Her challenge to check motives for ministry was powerful. Helga summed up her conference experience with one word: liberating.

Before moving to Minsk (Belarus) to plant a church, Rev. Tatiana Cantarella pastored in Moscow (Russia), where she was fully invested in her ministerial role. Her workshop, Identity as Minister, drew from the wealth of her experience as senior pastor and as a church planter. Cantarella captured the heart of the conference in a post-event interview when she described church planting in a city where there are no other Wesleyans: “It is a challenge to exist within a Christian community that struggles with my call and gifts because I am a woman.” 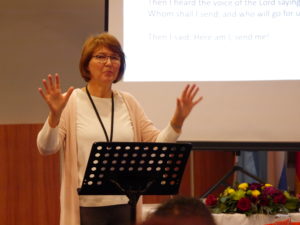 From that perspective, this was a meaningful opportunity to step back into her pastoral role as a workshop presenter. Cantarella appreciated reconnecting with people who recognize her as a pastor and as a minister. She also mentioned the richness of being immersed in the spiritual traditions of lament and covenant prayer stations as a participant.

CALLED: Reimagine is a strong statement for the egalitarian position on women and ministry – a position held by the majority of churches in the Wesleyan-Holiness tradition.  Egalitarians believe that women are equally called and gifted by God into any and all roles of leadership in the church. On a global scale, amidst the broader Christian community, the position is controversial.

There are pockets of growing acceptance which can be seen predominantly in North America and Western Europe where churches draw upon the precedence of earlier generations within the Wesleyan-Holiness movement who ordained women. Denominationally, both the Wesleyan Church and the Church of the Nazarene have benefitted from the leadership of women in every level of church administration. In 2008, Dr. JoAnne Lyons was elected as General Superintendent of the Wesleyan Church, the highest office for that denomination. The Church of the Nazarene has elected two women to the General Superintendency: Dr. Nina Gunter in 2005 and Dr. Carla Sunberg in 2017. 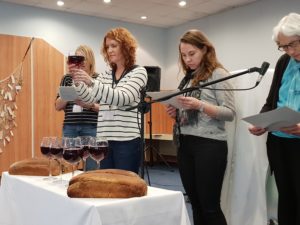 Khobnya and Cantarella, who are both Russian, represent the religio-contexts of the vast majority of women attending the conference. Most churches in the former Soviet nations, the Middle East, and the Balkans  prohibit a woman in the pulpit or in any place of authority or leadership over a man.  For these contexts, those attending CALLED: Reimagine are the first generation of women ministers and they come with the full blessing and advocacy of their denominations and organizations. Even with that blessing, they have a challenging journey ahead of them. They are the first generation who dares to enter a pulpit and preach a sermon. They are the first generation of women to serve the church as pastors, ministry/denominational leaders, and theologians.

Across the vast European continent, this generation of Wesleyan Holiness  women has a hope for young women and men like Qendressa. CALLED: Reimagine is a step in the direction of that hope to form both a present and a future where a woman in the pulpit is a normal occurrence.  because the Lord of the Harvest is calling and equipping workers. The glass ceiling across the continent has more cracks as women like Qendressa, Ann, and Helga return to their places of worship with new vision and better equipped for God’s call.

This article is written by Teanna Sunberg and previously published in the December 2018 edition of Where Worlds Meet.