Fast and flexible – update from Nepal 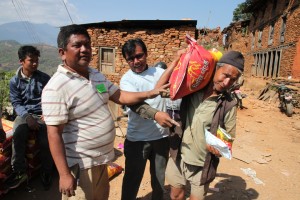 “Our biggest advantage to being a small organization as Nazarene Compassionate Ministries: We are very fast and very flexible,” said Jörg Eich, Eurasia Region NCM coordinator in a debriefing the day after NCM Nepal team members carried more than 300 bags of rice to the village of Tindhara where every single of 223 households had lost their homes, and many had lost their means of self-support.

The 20 pastors and leaders from Nepal had gathered at the NCM center May 6 in Kathmandu to discuss what they had done well in the food distribution the day before and what they can do better in the future.

Their most effective strategy was that when they sent four NCM volunteers including one Nazarene pastor and two NCM staff to Tindhara on the Friday after the earthquake to assess the local needs and determine a response, they involved the local villagers. First they approached the local government leader to ask permission, who agreed, and connected them to 10 villagers who helped them carry out the assessment among their neighbors. It exemplified community buy-in.

With the assessment in hand, the four volunteers returned to Kathmandu to plan next steps. By Saturday they had decided to move forward with helping the village. Because they had done the assessment, they would know exactly how much food to buy, and not risk buying too much or too little.

On Sunday they printed a banner with the name Nazarene Compassionate Ministries on it and ordered stickers with more information about the organization to put on the food bags. Sunday night they purchased the rice, oil and salt and loaded up trucks that they rented that day. Monday, they departed before dawn for Tindhara.

The team had the foresight to encircle the three trucks of food with a team of motorcycles who could go before, beside and behind the convoy to alert them of any obstacles in the path or if the trucks got separated by stops for fuel.

They had brought useful supplies, such as a rope to section off people at a secure distance from the rice, and so the people would take turns picking up their food when their names were called. They also brought an ink pad, so that those families who could not write their names could put a fingerprint on the list to show they had received their food. And the whole team wore matching t-shirts, so that the villagers could easily identify the NCM team members in the crowd.

Because the NCM volunteers had already worked alongside 10 members of the community, they were readily accepted when they arrived with the supplies.

The debrief continued as the group outlined additional things they could add to their relief distribution routine in the future, such as bringing brightly colored, very sticky tape to cordon off different areas, and to bring an adequate supply of ink pens.

The debrief concluded with decisions about how to help more people hardest hit by the earthquake in the next few weeks. 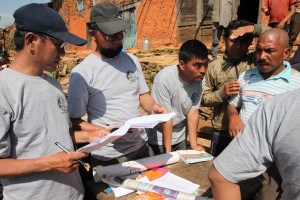 Rev. Dilli said that because many other organizations are also distributing food, NCM Nepal will move on the second and third of its three earthquake relief priorities: shelter and pure water.

This week, the team is ordering tents, 30 of which are already on their way, and researching the best water filters to buy; they have plans to buy 2,000 to give to households that no longer have running water. They will work together to decide where they are most needed.

In the meantime, NCM still has 195 bags of rice left, and they will make plans for how to distribute them in the coming days.

How You Can Help

Give
Your donations to the Nepal Earthquake Response fund will be used to provide food, water, and shelter, as well as supporting long-term recovery efforts.

To send donations by mail, find your country below.
In the U.S., make checks payable to “General Treasurer” and send them to:
Global Treasury Services
Church of the Nazarene
P.O. Box 843116
Kansas City, MO 64184-3116
Be sure to put ACM1549 in the Memo area.

For any other country, give through your local church or district, designating your gift to “NCM Nepal Earthquake Response.”

Feeding the Hungry in Nepal