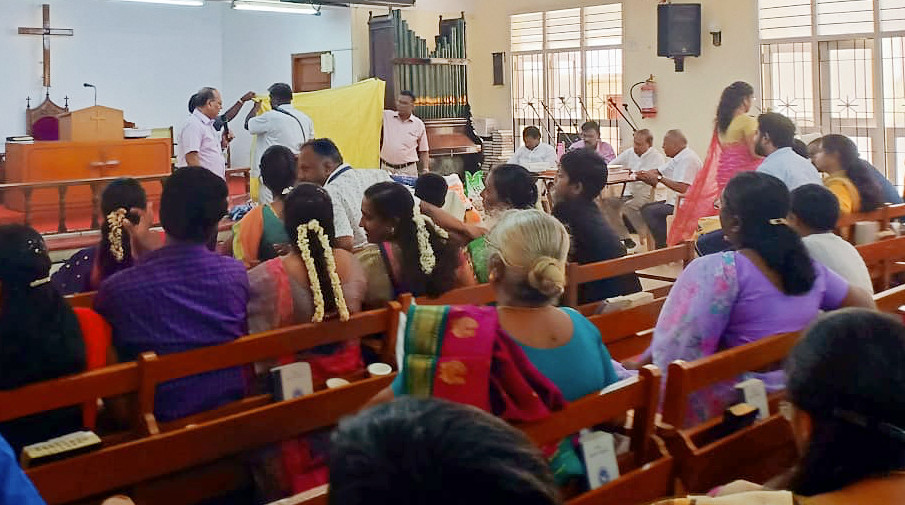 In mid-August, the Calvary Church of the Nazarene, Chennai, India, raised 5.5 lahk (7,857 USD) Indian rupees to help the Peniel Church at Villpatti, Kodaikanal, begin construction on its own building.

Since 2009, the 35-member Peniel church has met in a rented space. Though the church has purchased land, because the congregation members are daily wage earners, there is no way for them to pay for the materials to build their own sanctuary. Meeting for so long in a rented space hurt the membership, as the lack of a proper worship center led some members to move to other churches.

Raising funds for ministry projects through an August “Thanksgiving” fundraiser is an annual tradition for the 320-member Calvary Church.

“When I proposed this project to our church board, there was oneness of mind among all the members and they approved it with great joy,” said Rev. Dr. C. S. Dhas, pastor of Calvary Church. “I constantly encourage and challenge my congregation and the church board to meet the needs of various congregations of the Eastern Tamil Nadu District of the Church of the Nazarene, and when the need arises, they support it wholeheartedly.”

Calvary Church of the Nazarene has long felt a responsibility for nurturing and partnering with other Nazarene churches across India. Under 37 years of Dhas’s pastoral leadership, the congregation has planted several churches and initiatives that express God’s love and holiness in their communities, leading many to give their lives to Jesus Christ.

Every year, in the first week of August, the 320-member church celebrates a Thanksgiving/Harvest festival in a traditional way: the congregation brings thanksgiving offerings in the form of various goods like vegetables and fruits, plants, handmade items and household utilities to the altar. The senior pastor prays over the items before they auction them back to the congregation. People joyously buy these things for a higher price (sometimes twice or three times) than the original value to express their gratitude to the Lord.

Previously, the Calvary church’s Thanksgiving fundraiser has covered all the costs to build the Nazarene Ministry Centre at Alamathi, the Bronell Greer Memorial Chapel and Parsonage, the Paula Greer Memorial Senior Citizen Center, and Watchman’s Quarters, at Alamathi, in the outskirts of Chennai.

The church spends a month preparing for this special Thanksgiving weekend, including setting a fundraising goal. This year, the goal was 12.5 lakh rupees (17,857 USD).

The weekend started on Saturday evening with a short thanksgiving prayer, followed by the auction. On Sunday, the fundraiser continued as breakfast and snack stalls were set up outside the church building after the morning service. Sunday school children and youth conducted games. People purchased tokens from the church treasurer to buy food and drinks and play the games.

When 5.5 lakh rupees had been raised, Dhas challenged his congregation: “This is the work of the Lord, but 5.5 lakh is not going to be enough. We need 12.5 lakh. I know there are more generous people in the congregation who are blessed by the Lord and can donate towards this.”

An immediate response from one of the members was, “I will donate 3 lakh rupees for this project.”

Dr. Dhas says, “There are more who are willing to contribute, and hopefully the need will be met totally.”

The congregation continues to reach for their goal.

When the Peniel church congregation heard of the possibility of having their own sanctuary with finances provided by Calvary Church, they happily committed to providing their physical labor for this project.

Dhas, through his district, is presently overseeing the pioneering work in Kerala with the help of a local leader Rev. Abraham Daniel. Calvary Church has been able to raise 1 lakh 6 thousand rupees for 2018 Kerala flood relief.

Dhas says, “A leader with the right vision and passion can motivate the congregation to be active in fulfilling the purpose.”

This article is written by Rev. Rajiv Yangad and previously published in the October 2019 edition of Where Worlds Meet.