“We trust that this is not just a time that we shall skip through, but God will speak to us and teach us new ways to be the church,” said Rev. Kaj Ove Bollerup, district superintendent for the Nazarene church in Scandinavia.

As billions of Christians around the world observed Holy Week, and now look toward marking the outpouring of the Holy Spirit at Pentecost, Nazarenes are among those seeking where the Holy Spirit is leading them during the coronavirus pandemic.

It is not possible to count all the congregations and small groups who are meeting over digital platforms for prayer, worship, discipleship, and fellowship. However, in the region’s developing countries, where Internet, electricity and cell phone coverage are not universal, Nazarenes are more isolated and some church members and pastors have been unable to communicate with one another regularly.

In these areas, a large percentage of the population are day laborers and subsistence farmers. They earn only enough each day to buy that day’s food for their family. As lockdowns and stay-at-home orders went into effect in Bangladesh, Nepal, Sri Lanka, and India, millions found themselves in an immediate food crisis, uncertain about their family’s survival.

Pastors in Nepal reported that neighbors had come to them or the church asking for food, money or loans to make it through the week, according to the district superintendent of Nepal. Yet, social distancing and stay-at-home orders have presented an historic challenge for how those districts that have some disaster relief funds (and are accustomed to responding to such needs) can safely distribute food and other necessary supplies.

“Our churches are so often part of these vulnerable and displaced communities, and as such are ministering in this environment,” said Tim Bowen-Evans, the regional coordinator for compassionate ministries. “Not all the information makes its way to us, but it is clear that local churches across the region are reaching out to those in need in the best ways that they can.”

Here are a sampling of some specific ways Nazarenes in Eurasia are affected by the pandemic, and responding.

“In terms of some figures, over the next week or two, we will have reached over 30,000 people with critical support in the form of food distribution or income assistance to purchase food where direct distribution is not available,” Bowen-Evans said. “Food relief is the primary intervention being carried out presently.”

A significant portion of relief is focused on elderly and isolated people and refugees. Another focus is helping families through NCM child development centers and the communities they serve.

“Where possible, sponsored children are still being supported and plans are being made currently to expand our efforts,” he said.

In Sri Lanka, a Nazarene pastor is part of a local group that is working together to meet pandemic-created needs within many villages.

“He’s the only Christian on the committee that organized it, which includes people from other religious backgrounds, and some wealthy business people who significantly contributed to the funds for purchasing the food,” said the *leader for the Church of the Nazarene in South Asia. “It’s wonderful that [he] has created this relationship and is active in the community working even with those outside the church to meet needs.” 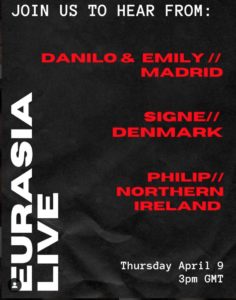 A new biweekly Instagram program is bringing together youth from across the Eurasia Region. Each program is focused on live interviews with Eurasian youth in different countries, hosted alternately by regional youth leader Diego Lopez, and youth member from Scotland, Amy Warner. They typically air on Tuesdays and Fridays, and the recorded videos are posted to the account.

It was something the regional NYI council had talked about doing before, but hadn’t made the move to actually do it, Lopez said.

“Amy Warner (from Scotland) said, ‘Why don’t we just do Instagram live if there’s a lot of people on the social media at the moment?’ There’s a lot of people preaching on the Internet right now. So we try to make it more like a conversation: what is new, a little bit of what God is teaching you spiritually; tell us about you.”

Interviews so far have featured youth and youth leaders from Sri Lanka, India, Albania, Romania, Bangladesh and the United States. One of the interviews with a youth leader in Sri Lanka was conducted while he was in the middle of a food distribution relief effort.

Lopez, who has been in self-quarantine in a small Spanish village, is also gathering the regional NYI council for video meetings several times a week. The leaders in turn began to make attempts at more frequent digital contact with youth leaders in their countries, since meeting in person is not possible. Virtual meetings are sometimes disrupted in India by unreliable electricity, which causes the Internet to shut down. In one area of India, where Nazarene churches and youth are highly active, the local government has shut down the Internet entirely.

“This is a very revealing time to see how this situation that we all face across the region, and across the world, is challenging us all in what we know about how to do ministry,” Lopez said. “But in the midst of it all, God is showing us a way to stay connected, to do discipleship, to bring others to Jesus, to develop and train leaders—all from the distance. It helps that we have built relationships in the physical world prior to this lockdown.”

The Church of the Nazarene in Budapest’s first live-streamed service on March 15 showed more than 2,000 viewers through the Facebook stream. Feedback showed that people from other denominations were watching the service, as well as relatives of church members who live in other cities. At the time, the church’s live service was unique among a number of other churches who had pre-recorded services and posted them, which contributed to the sharply increased number of viewers over its usual in-person attendance.

“As soon as the Hungarian government declared a nationwide state of emergency on the 11th of March, we responded immediately” said Rev. Maria Tulipan Gusztin. “On the first Sunday after the declaration, only one of our churches went livestreaming on the district. By now, all our congregations and other denominations have started to livestream in various ways.

“The sermon was closely connected to the pandemic. The preacher talked about how Christians should pass on the gospel as a virus is passed from one to another.”

Total viewership for following Sunday services has now come much closer to the congregation’s average Sunday worship, as other churches have been able to start livestreaming their services for their members, and because participation is now spread across the church’s other weekly activities that have also moved online, Gusztin explained.

People met via Internet from 9 a.m. to 5 p.m. for the 28 March district assembly, including a morning devotions, ministry reports, workshops and closing worship. The only thing missing was the food.

“The technically challenged people were also having their Friday night prayer meeting. A 72-year old forest engineer uses Skype and helped others, and some joined in via cell phone through someone via Skype. Actually, it worked very well. There was humour, encouragement, Scripture shared and prayer.”

A pre-existing closed district Facebook page (used for only district officers) was opened to all Hungarian Nazarenes when the pandemic began.

“We are very grateful to the Lord because in CIS until now we do not have any Nazarenes infected with COVID-19,” a leader wrote. “God had been merciful and is taking care of our people. We are also grateful because, as obedient Christians, we all are following our government’s directions.”

One pastor was stopped by a police officer while walking to the church with packages of food. He explained that he was an evangelical pastor delivering food to the needy. The officer encouraged him to continue, saying that the police were grateful for his work because “the evangelicals are the only ones helping the poor.”

Initially, the Central Asia District purchased and distributed food packages to those most in need. When new government restrictions went into effect limiting this activity, the district adapted by sharing resources with the needy families so they can buy food for themselves.

The church in one country helped a family with receive urgent medical care, and continues to follow-up with them through instant messages.

The Armenia District, teams of volunteers are buying and distributing food packages among more than 100 families. Special attention is given to the elderly, refugees and children. Similar work is being done by the Ukraine District and in Russia.

In various parts of the field, Nazarenes have supported people by covering portions of their rent and utility payments.

The Nazarene café in Greve, near Copenhagen, closed March 14. Some of the volunteers (coming from up to 20 countries) have returned home. The social and ministry groups continue to meet on Zoom, according to Bollerup.

The church in Denmark has continued small groups, worship services and even choir practice on Zoom.

“It works well,” Bollerup said. “One positive outcome is renewing connections and adding people in that we have not seen for years. There are others who find technology too demanding, and these we need to remember to give a call.

A Portuguese Nazarene group meeting in Norway, and a Korean congregation in Finland, are meeting on Zoom, as well. The Korean group began meeting remotely in February at their own initiative, because South Korea was already affected by the pandemic, and some of the congregation members had recently traveled there, Bollerup said.

Bollerup suggested the global church family could pray for the following requests:

1) That we may hear God’s voice though this and be the church and an embracing community even as we are separated.

2) Concrete ways to respond as a church to the needs that arise and the growing sense of loneliness that some experience.