“We cannot manage this alone – but with your help it is possible!”

Sri Lanka – A few extra days of rain – what does that matter to many of us? A detour due to a flooded road, muddy footprints in the hallway, a cancelled picnic in the park?

For many people in poorer countries, the results are devastating. 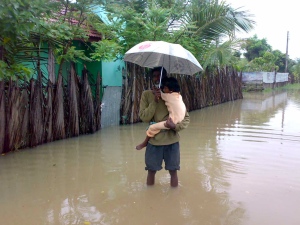 Murugaiah and his three children live in a small town in eastern Sri Lanka, where Murugaiah has been cultivating rice for 30 years. He says the January flood this year – which particularly hit the east and north of the country – is the worst he has ever experienced. In some ways the floods’ extent is worse than the tsunami six years ago.

"We’ve lost practically everything," he says. "My three acres of paddy fields, our small thatched house, our furniture and household items, the children’s books and school material – everything has been washed away."

For the past week they’ve been staying in a nearby school. One day they went to check on their house, and all they could find were a few pillars and sticks.

But that’s not the worst.

"A few days ago my wife disappeared," Murugaiah explains. "The police and the whole village are looking for her, but so far we don’t have a trace."

The children are convinced that their mother will return soon. And Murugaiah, too, is holding on to hope: "We know nobody is responsible for this flood. And we firmly believe that we will receive help. We cannot manage it alone – pick ourselves up again and start life anew. But with your help it is possible!" 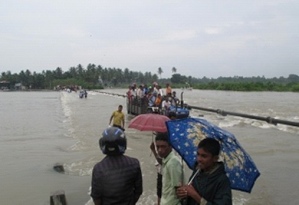 Nazarene Compassionate Ministries of Lanka (NCM Lanka) has helped in a variety of disaster situations in eastern Sri Lanka since December 2004, including that year’s tsunami, as well as local conflicts and civil war refugees. The nonprofit organization has also offered relief and rehabilitation, and started a number of child development centers.

Thanks to their experienced staff and good contacts, NCM Lanka is able to help the local people quickly, effectively and appropriately. With their high‐quality and reliable service, NMC Lanka’s workers have also gained the trust of the local population, especially from the people in the Ampara and Batticaloa districts, where 90 percent of the flooded areas are located.

Agriculture has been hit hardest. In the eastern parts, known as Sri Lanka’s "rice bowl," up to 80 percent of paddy fields are flooded and damaged, probably destroying the entire rice crop for this season. Other crops have been affected as well, and prices are skyrocketing.

Thousands of people have found refuge in about 600 relief camps established by the government and aid organizations; some of these had to be relocated due to flooding. Schools are closed or being used as relief camps; several are damaged, and 350,000 school children have lost all of their school materials. The new semester had just begun – now many families that can hardly afford school material in the first place are wondering how to find new books and paper for their children.

The greatest needs at the moment are food, clean water, medicine and medical services, hygiene articles, clothing, mosquito nets and blankets. The temperature in these usually tropical regions has dropped below 8°C/46°F. But even after initial problems are overcome, new dangers lurk: the floods and receding waters may unearth landmines in former war areas and carry explosive materials into areas believed safe.

Later rehabilitation measures are expected to focus on a seed and nutrition project. People like Murugaiah will not hope in vain: Together it is possible to start life anew.