Relief for Rohingya refugees in Bangladesh

Home/News/SnapShots/Relief for Rohingya refugees in Bangladesh
Previous Next

Relief for Rohingya refugees in Bangladesh 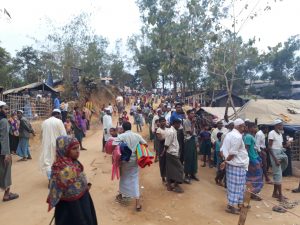 Asia*, a 60-year-old Rohingya woman who fled violence against her people in Myanmar, could not sleep at night in the refugee camp in Bangladesh because she was so cold.

On 8 December, Bangladeshi Nazarenes representing Nazarene Compassionate Ministries (NCM) traveled to a Rohingya refugee camp in a place known as Cox’s Bazar, which the United Nations has reported is now home to the densest refugee population in the world. In this part of Bangladesh, the Church of the Nazarene does not yet have a presence

The Nazarenes received specific information about the refugees’ needs from international organizations that had already conducted assessments. With permission from local authorities, they then distributed nonperishable food items. They also provided packages that contained two mosquito nets, two blankets and a sleeping mat.

“Today I got two blankets and some other things,” Asia said. “It will remove cold, and I could sleep at night properly.”

Asia fled Myanmar with four sons and two daughters. She said that her fifth son was killed when the persecutions started there in August.

“I escaped from my birth land, Myanmar, to save my life with others. I walked three days and reached this camp. I could not bring any clothes with me.”

Asia and her family are currently living in a shack constructed of sheets of tin.

Myanmar is the home for an estimated 1 million Rohingya people, an ethnic Muslim minority within the majority Buddhist country. For decades, Rohingya have been fleeing Myanmar, which denies them citizenship, according to the BBC (http://www.bbc.co.uk/news/world-asia-38168917) 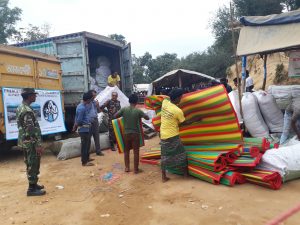 However Bangladesh, where more than 800,000 Rohinyga are now refugees, is ill-equipped to care for them, according to one local NCM worker*. A deeply impoverished and densely populated country, Bangladesh suffers repeated disasters, such as wide-spread flooding and tropical storms.

Bangladesh NCM is currently focused on emergency response, but also is developing plans for a long-term project to specifically support the most vulnerable – women and children. For instance, they would like to establish a “child-friendly space” and a counseling center.

Although Myanmar officially welcomed the refugees to return, and refugees desperately wish to go home, many are too afraid to go back. And many have nowhere to return to – homes, fields and villages were burned to the ground.

“Many young women would not like to return home,” the NCM worker said. Homes were set on fire and women were raped. “They think Myanmar is not a safe place for them…. Thousands Rohingya lost their life in the conflict.”

Sufia*, a 35-year-old woman, told an NCM worker that, “They torched the village, killed the men, and raped the women and girls.” 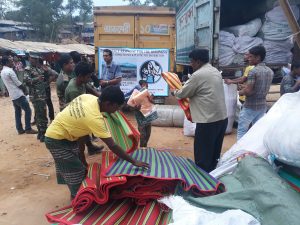 With four children of her own, all under the age of 15, Sufia fled alone; her husband was killed in front of her eyes.

The NCM worker reported that her children appeared malnourished, although the non-government agencies had distributed food.

Sufia was particularly grateful for the mosquito nets she received from NCM, as there are many mosquitoes in the camp.

“Around 1,000 Rohingya women and children already have been trafficked,” the NCM worker said, citing a local newspaper report. “We felt sorry by hear their misery stories. We think, they are our neighbors and we should help them as the Holy Bible teaches us.”