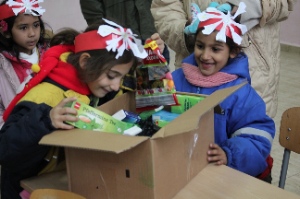 Our bus leaves at a quarter to 7. It’s so cold that the window panes are frosted over. Every time the door opens, a blast of cold air sweeps through the bus. We move through the dark hills, drop off teachers at local schools in the villages, pick up a few children: Their village schools have refused to take them in, because they are Roma kids, and nobody wants them. Some don’t even wear a proper jacket.

We reach Vidrare shortly before 8 a.m. and walk to the school, a bright, friendly building painted in welcoming colours. Seventy-one kids attend classes here and receive two meals a day. All of them are Roma children. Zhana Georgieva, a Nazarene pastor in Bulgaria, has been ministering in this school for many years now. Some of her duties include Bible classes and awareness raising among the children, for example about hygiene or human trafficking, a serious issue in this area. Zhana also supports adult literacy classes for the parents and makes many, many home visits, spending time with the families, giving advice, being a friend. The villagers have learnt to trust her. And they know: When Zhana comes with the Helping Hands Christmas parcels, she doesn’t ask anything in return, like a vote or a membership. “Often I hear people say: ‘You’re not like the others,’” Zhana tells me. “Others are buying their dignity, using their poverty to take something from them. But with us, with the Nazarene church they know: They are going to help us anyway.”

Today there are no lessons at the Vidrare school: It’s Christmas party time. There’s lots of loud music, a cultural show and a free tombola where the prizes are toys taken out of Helping Hands aid boxes. Later, the Christmas parcels are distributed, one parcel per family. For many children, the chocolate and gummibears in the parcel are the only Christmas present they’ll receive. 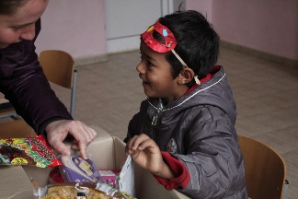 Some of the children open their parcel right away. Gloria and Veni break into smiles when they discover the sweets. Their cousin, 5-year-old Lubo, is examining the toothbrushes with interest. Today he’s a happy little boy. But only a few days ago he had run, weeping, to his grandmother: His father is an alcoholic and had attacked the mother with an axe. The grandmother, Christina, takes good care of her grandchildren. Other kids from the neighbourhood also like to show up on her doorstep. The family is poor, but the middle-aged woman helps her neighbours where she can.

This year Christina also received a Christmas parcel. She works in a home for disabled children that is situated at the edge of the village. The employees have very small salaries. But they are not entitled to receive financial support from the government since they are not unemployed. That’s why Zhana gave a Christmas parcel to each of the 70 staff members. “They were really surprised and happy that we thought of them,” Zhana reports. “For the people here the parcels are a great blessing. There’s something in them for everyone. The families are very grateful!”