‘The last shall be first’: Sudhir’s story

‘The last shall be first’: Sudhir’s story 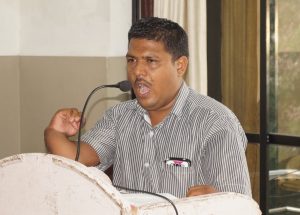 Sudhir had short and crooked arms. He had just finished his junior college in Chandikapur, in Maharashtra, India, and was thinking about how to begin earning an income. Since he was an eldest son, he felt responsible to support the family. But his short and crooked arms created a difficulty for him: Because of those hands, people always underestimated his abilities, considered him a liability, and rejected him for any job.

His village friends knew Sudhir’s ability and came to his rescue. They told him about an opportunity of serving with a village official, and so he started cleaning the village gutters. Village gutters in an Indian village are very dirty. People throw all sorts of soil in it, from bath water to waste water from cleaning vessels and clothes. Sometimes even the overflowing water from latrines and toilets would go into it, and it would smell extremely bad. But Sudhir worked hard. After all, he needed money to help his family.

One day, his maternal aunt Vandana came to his house and saw what Sudhir was doing. She felt very sad about it and asked him to go with her to a better town called Chikhli, where she would arrange for a better job. She worked in a school there, so she introduced Sudhir to the management and they hired him as a helper on a school bus.

Vandana and her family had embraced Jesus Christ as their personal Savior and were regular church attenders. Sudhir used to accompany them. 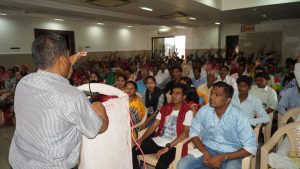 One day he was asked by the pastor to go on a ride with him. He spoke with Sudhir about the real disability in human beings’ life, which is sin. Sudhir had never heard about this. He became very curious and started paying close attention to what the pastor was saying. The pastor also introduced him to a remedy for this “sin disability,” and Sudhir realized he needed this remedy. The pastor led him in the prayer of repentance, and Sudhir accepted Jesus Christ as his personal savior.

Sudhir’s aunt and family were overjoyed by this news. Along with the pastor, they  discipled him daily. Sudhir kept growing in faith and was baptized.

A few months later they had started a Bible course for some young people. Sudhir enrolled in it and progressed well.

Later on he was sent to another city as assistant pastor. Sudhir proved himself to be a ‘Timothy’ to the pastor. When the Spirit of the Lord moved the senior pastor to another city, Sudhir was given charge of the congregation. Sudhir worked hard under the guidance of the Holy Spirit and his superintendent, and his church kept multiplying.

Today, Sudhir is providing leadership to about 25 different house churches across his city. He has built a team of vibrant evangelists around him and the Lord is constantly blessing his efforts.