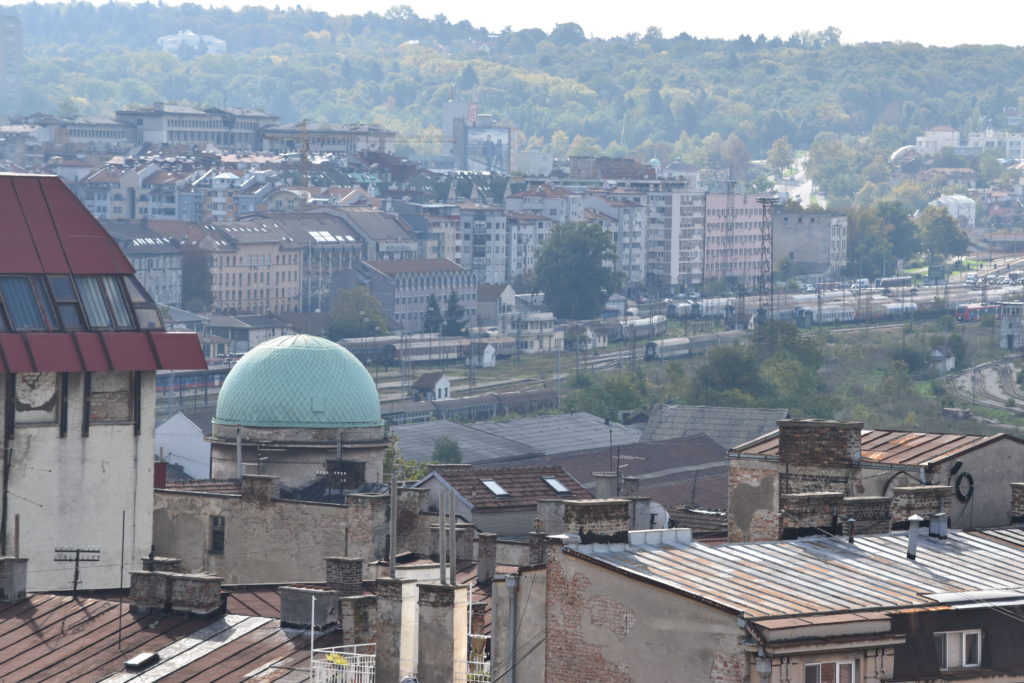 Editor’s note: The Church of the Nazarene has been present in Serbia since 2016 when refugees flooded into the country from Syria and other areas torn apart by violence and war. Within the Central Europe Field, Serbia’s overrun refugee camps from the first welcomed Nazarene volunteers to assist in refugee support.

A summer volunteer, Kaitlyn Williams, writes about the deep and positive impact the simple acts of painting and cleaning the refugee camp’s living spaces has had on the people who have been waiting — and losing hope – for a new life and a new home.

A clean and clutter-free home is sometimes an indicator of hope.

This summer, my job at the refugee camp in Belgrade, Serbia, was to paint and clean rooms, halls, doors. It may not seem like much, but to the refugees here it means a fresh look for their temporary home. More importantly, it means someone noticed and cared about their situation, and did something to make it better.

Five hundred to 600 people live in this camp, but there is turnover. Each day, about 20 leave and 20 arrive. The living conditions are not nice, but people have a place to sleep and food to eat. Our team goes in to help clean and improve the residents’ spaces.

We painted the small, shared room of four teenage boys (ages 14-18) who came to Serbia alone. Unfamiliar with keeping house, and unaccompanied by a caring parent, their room became smelly, dirty, messy and dark.  Exactly what one might expect when four boys share a tiny space, apart from positive familial and community relationships. These boys have no guidance, no encouragement, and to be frank, they are unfortunate enough to embody a stereotype of the kind of people who are dangerous because they are dark-skinned; that they are predatory because they are single and male; and that they are stronger and more capable of doing bad things because they are young.

They are left to do one of two things: Try to leave Serbia for a Western European country where they have family members, or wait.

Both are hopeless options.

Traveling further into Europe is dangerous. Many who make the attempt return to the camp with injuries, even animal bites. Some say border officers beat them when they were caught.

Serbia invites a small number of asylum seekers each year to become permanent residents. That means once a refugee ends up in a Serbian camp, they are probably going to be there indefinitely. Some refugees I work with have been in this camp since it opened five years ago. Some have held refugee status for decades.

The second option, waiting, means the refugees are waiting for nothing. They cannot travel further, they cannot legally work in Serbia, and almost none will be allowed to settle in Serbia. So, fear, hopelessness and anxiety set in.

Without the sense of purpose that comes with going to school or work, and without the ability to earn money, these refugees, especially the teenage boys and young men spend much of each day drifting aimlessly around camp. Anger and chronic depression plague them.

At first meeting, the young men are hesitant, reluctant to trust us. But when we engage in conversation, they laugh and smile, responding to people who take an interest not only in the beautification of where they sleep at night, but in them as fellow human beings. Somehow, this inspires them to clean, and actually help with painting their rooms and the barracks hall.

After my team and I return to one of these newly painted barracks several weeks later, the rooms are usually still clean. These guys don’t need people to do it all for them, they just need someone to demonstrate through words and actions, “We care about you,” and they need encouragement not to completely give up. As we paint and clean together, they realize that the simple act of brightening up the barrack brings brightness into their lives, and hope, as well.

During my summer of ministering in Serbia, I’ve learned that people simply need to be shown love, and even painting their dwelling space can do that. Whether it’s a lighthearted joke to the disgruntled 16-year-old or a simple smile to the exhausted mother, investing in people’s lives makes all the difference. In a world where refugees are marginalized and forgotten, we need to work harder and be better at showing them that they are valued and they are loved. Maybe then we can work to find them a place that really can be home.

This article has been written by Kaitlyn Williams and previously published in the November 2019 edition of Where Worlds Meet.