Rev. Arthur Snijders began serving as the Eurasia Region Director (RD) in October 2013. In March, he stepped down after almost seven years of leading the Church of the Nazarene in this vast and diverse region.

In an interview with Where Worlds Meet, he looks back over these years of service and considers all God has done to give progress and growth in the Eurasia Region.

WWM: Your prior ministry included pastoring a local church in England, teaching at a theological college in the Netherlands, and serving as the district superintendent of the Church of the Nazarene in the Netherlands. What was it like for you when you stepped into the RD role for the Eurasia Region?
Arthur Snijders: When I became responsible for the Eurasia Region, travel became part of my ministry. Often my wife and I travelled together: to India, South Asia, Russia, the Middle East, and so on. We entered a new world; many things were unknown to us. We met people and situations that we had never seen before. Frequently we were overwhelmed, swept off our feet, not knowing what to do. In the first days, I needed to decide about a huge investment in our hospital [in India] without knowing it at all. Elsewhere I needed to decide whether or not to evacuate our missionaries from a country bordering on a civil war in its capital. What to do?

So, Eurasia has been our training ground, teaching us to rely on the Lord for His mission. The Lord opened our eyes to what He was doing in many places across Eurasia Region. We have been amazed. What we don’t want to forget is what Moses reminded his people of: “The Lord made you ride on the heights of the land and fed you with the fruit of the fields. He nourished you with honey from the rock, and with oil from the flinty crag” (Deut. 32:13).

WWM: Are there any special memories of people you met during your travels?
Snijders: One of the testimonies that I carry with me is of an Indian pastor who was rejected by his family when he became a believer. He was literally kicked out of the house and disowned. Yet, he and his wife persisted in seeking to show genuine love and care for several years. Gradually their family came to see that the change because of their faith was good and real, eventually leading to reconciliation, and some finding faith in Christ.

In this vast, pluralistic nation of 1.2 billion people, fellow Nazarenes show how a courageous and persistent kind of love gives a clear message about Christ that is not easily set aside. Through meeting believers like these, I learned that the love of Christ permeates each culture and takes on cultural dress. We can only grasp how wide and long and high and deep His love is, together with all the Lord’s holy people (Eph. 3:18).

WWM: Were there any situations that you didn’t feel prepared for until you entered them?
Snijders: I remember how anxious I was when first travelling to visit churches in the Middle East. “What can we say that will be of value in a place so full of conflict?” I wondered. The Spirit spoke in my heart, “Don’t talk, but ask questions.” As we met believers, we asked them, “How do you follow Christ in your country?” Our people were glad to testify of what the Lord had taught them. Story after story encouraged us greatly in our own trust in the Lord. After this we could share with others in the region how the Lord was providing honey from the rock in this strife-torn area, and how He could do the same elsewhere in the region.

WWM: During your tenure, the conflict in Syria reached its peak, and millions of refugees  from the Middle East, as well as North Africa and other places, flooded across the length and breadth of the Eurasia Region. What stands out to you from the experience of organizing our denomination across many countries to minister to these people?
Snijders: Many churches opened their doors for refugees, and one church explained how they started with basic relief, such as handing out food and clothing. But quickly they learned that they should visit the homes of the refugees to help them with their many other needs and traumas. These Nazarenes found that refugees’ greatest need was finding new hope. One leader said: “It is not legal to evangelize in the streets, but inside the church and the home we can share Christ with complete freedom.” Now hundreds of people gather every week to experience Christ ministering through His church to their bodies and their souls. Traumatised lives are being healed. This, too, is oil from the flinty rock!

In this season, refugees are being prepared for the time that they will resettle in other countries. They realize they can be ambassadors for Christ, and church planters and pioneers in their new countries. Pushing our boundaries has been a regional priority that the Eurasia Church has been working on. There are now Arabic-speaking Nazarene churches in Poland and Croatia.

One of our regional priorities during these years was to more intentionally strengthen our connections as an interconnected church. Nazarenes worked together across multiple countries to serve thousands of refugees that spread across most of Europe and the Middle East. I do not think that we as the Church always get it right. But I encouraged our leaders through this migration crisis that it is better for us to fail because we tried as best as we could, than to hold back because we are not certain what to do, and later look back in regret. When we connect with each other, we develop partnerships that make us rise high above ourselves.

WWM: Why has it been important to you for Nazarenes to strengthen their connectedness and partnership as one Body across diverse cultures, languages, economic differences and national borders?
The Lord still calls people to become missionaries and break new ground. Christ still affirms, “Go and make disciples of all nations” (Matt. 28:19).

WWM: How have you seen Eurasia’s interconnectedness and missional calling in action?
Snijders: Nazarene churches getting to know Nazarene churches in other countries not only enables them to enter partnerships, it also stirs up the desire to be actively involved in cross-cultural service; in missions. Over the past seven years of leadership, God has opened doors for Eurasia Nazarenes to begin laying the groundwork for officially entering several new world areas where our denomination has previously had no official presence. The region’s M+Power initiative brought together a team of dedicated Eurasian Nazarenes under the leadership of Rev. Annemarie Snijders to help establish training and systems to facilitate and support cross-cultural volunteers from Eurasian countries to other countries. India and Bangladesh have sent their very first cross-cultural workers to serve in other nations. Another example is a couple from Russia who moved to Latvia as self-supporting pioneers through M+Power to establish the Church of the Nazarene there. In the past few months they have succeeded in registering Nazarene Compassionate Ministries (NCM) with the government.

To reach all the nations in Eurasia, our region has been trying to make it easier for people to become involved in missions. For example, one couple from Portugal served in England among Portuguese-speaking people from Brazil, Cape-Verde, and other countries. The small district of Ukraine was instrumental in planting a Ukrainian Nazarene church in Spain. Isn’t that amazing? God is able to bring honey and oil out of rocks.

WWM: What were some of your most challenging moments?
Snijders: Blessings go hand in hand with setbacks that are often heartbreaking. As a church, we do not speak much about this. But for me, Nazarene missions is a discipling story that includes restoration in Christ. Bangladeshi Nazarenes celebrated their 25th anniversary in 2018. A powerful movement of 25 years resulted in 130,000 believers. Yet, the same work was also vulnerable to the temptations of power and money, resulting in gifted leaders losing their way and quenching the Spirit. But the Lord used this trial to bring a new depth and dependence on Christ to the church; as a region, we learned together with our brothers and sisters from our mistakes. Our Bangladeshi church is now even stronger than before. When one of the leaders was asked by a general superintendent about faithfulness to our denomination, his response brought tears to my eyes: “Our people have found the Christ in the Church of the Nazarene. They will never forget that, and they will stay and be faithful!” 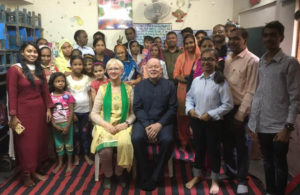 The Nazarene mission hospital in Washim, India, is also a story of restoration. For more than a decade our hospital was struggling and no longer effective in its mission of bringing healing in Jesus’ name to the poor and needy. No one seemed to know what to do to change this. But connections were made with two strong, Christian, medical organisations in India. Indian field leadership and international Nazarenes as a joined team pleaded, “Come over and help us!” And they did; they partnered with us.

Many people, including local staff, volunteer consultants, India church leaders, our regional leadership team, and many donors, invested in Reynolds Memorial Hospital and the affiliated Nazarene Nursing College. By the grace of God, over the past four years, the hospital and nursing college have been brought back to health and sustainability, back to a true holiness ministry of service. What a joy it was in January 2019 to witness the re-dedication of the hospital first-hand, and the graduation of close to 200 nurses from our Nazarene Nursing College. Our God is a resurrection God!

Through all this, I learned that what is lost can be restored and gain new depth and dependence on Christ.

It is not easy to leave all of this behind as we hand over our regional ministries to others. But Annemarie and I believe what Christ says: “Very truly I tell you, unless a kernel of wheat falls to the ground and dies, it remains only a single seed. But if it dies, it produces many seeds” (John 12:24).

WWM: What will you both be doing next?
Snijders: We will return to the Netherlands and become part of the ministry in our district and will seek ways to put our cross-cultural experience to good use.

“I am thankful for the years of faithful serving that Arthur and Annemarie provided to missions in the Eurasia region. The Lord blessed their willingness to continue the work of resolving problems, facilitating vision and cooperation to see people become disciples of our Lord. Their willingness to let the Lord lead them into unknown areas of culture and peoples will continue to hallmark their ministries. We in Global Missions are grateful for their ministry and pray for their continued fruitfulness in the Lord’s work.”

“Arthur is an outstanding leader with strong gifts in administration and strategic development. He is totally committed to whatever task he is assigned and works tirelessly. He is an effective speaker and engaging teacher, and he has the ability to identify with many different cultures.”

The Snijders have served the Eurasia Region since 2013. Prior to this ministry assignment, Arthur was district superintendent of the Nazarene church in the Netherlands, and professor in theological education at an Evangelical College; also, he was involved in mentoring of leaders in the Northern Europe Field. Annemarie was a church planter for two churches. They are both ordained elders, and in the past 34 years have pastored several churches. Their first church was the Skelmersdale Church of the Nazarene in England, giving them a desire to be involved in cross-cultural ministry.