An old, broken bicycle gave Francis Kinnon an idea: Repair unwanted bicycles and donate them to health care workers in the community.

A member of the steering committee at Church on the Corner, a Nazarene church near Blackpool, England, Kinnon has been out of work due to stay-at-home orders. So, when his wife urged him to get some exercise, he went to look at his bicycle, which had sat unused in his garage for seven or eight years. The bicycle needed repairs before he could ride it.

Kinnon’s son, Ben, is an engineer who is also out of work due to stay-at-home orders. Ben offered to repair his father’s bicycle. While they worked on the bike together, they sensed God showing them an opportunity: do the same thing for front line workers.

So, they advertised their idea on Facebook and in other places: They would take donations of used bicycles, repair them, and donate them to health care workers. They called their project, Bikes for Heroes. Within half an hour, Kinnon says, they received 125 responses, many of whom offered to give them old bicycles, and some people requesting bicycles.

The first day, they picked up 10 bicycles, which filled up the garden workshop and even the kitchen. And they had another problem beyond limited space: the two of them alone couldn’t repair the bikes very quickly, let alone sort through and answer the flood of inquiries, and then deliver the finished bikes.

Ben’s friend, Dave Sherry, also an engineer, offered to help with the repairs. And the church’s pastor, Ken Baker, offered the church building as a workshop.

“The church building has been empty and unused since lockdown over a month ago,” Baker said. “Personally, I thought it was a wonderful project and a wise use of an empty space.”

The first day, the trio repaired six of 14 bicycles, including replacing brakes and chains and touching up the paint. They gave three of the bikes to key workers in the National Health Service.

“God just kept throwing more and more at us,” Kinnon said in a video post on Facebook about the project. “We were then overwhelmed with a response from the general public. The more we gave, the more God gave.”

The Salvation Army got involved, donating brake parts, gear changes, gear wires, as well as three bike repair stands, so that Ben, Dave and Kinnon wouldn’t hurt their backs by bending over for hours. And they’re working long shifts – often from 9 a.m. to 8 p.m.

They had been delivering the bicycles out of their car, which could only hold one bike at a time. A company called GMC, which heard about their work, offered them the use of a van for deliveries.

“We started off with the small van and, obviously by God’s grace, within a day we needed a bigger van,” Kinnon said.

Another even larger van was offered, which holds 12 bikes. And a local bike shop, Wyre Cycle Fix, has been repairing surplus bikes that Ben and David haven’t been able to get to, according to the Blackpool Gazette, which wrote a story on the project.

“One of our members is a nurse at Blackpool Victoria Hospital where there have been many deaths,” said Baker. “She is living in a caravan so as not to infect her husband and three children.  She has been a contact for other nurses [to receive bicycles].”

Baker and Kinnon estimate that about 150 bikes have been received so far, and with a team of three mechanics working long days, about 40 were repaired and donated.

Baker said that one nurse who received a bicycle was moved to tears by the gift.

Just 10 days after they first posted their advertisement for Bikes for Heroes, a large, empty hospital was donated as space to expand their repair work, Baker said.  And, a local firm offered a fleet of vans to help in the bike collection and distribution, as well as free gas-cards so the drivers can fuel up for free. The firm also donated magnetic signs with the Bikes for Heroes logo to replace the firm’s logo on the vans.

“My son, who was going stir crazy in his flat, is now working with his hands and his mind, and feels so fantastic about it,” Kinnon said. “His friend Dave is also taken out of his flat and being productive. My wife, Bev, is doing the administration. My daughter, Rhys, is helping us deliver. My daughter’s friend is cleaning and doing the jobs that engineers don’t particularly like to do. It’s become a completely unique group of people coming together.” 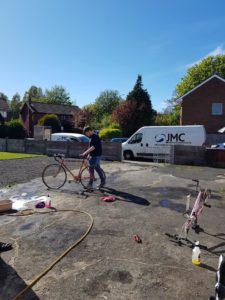 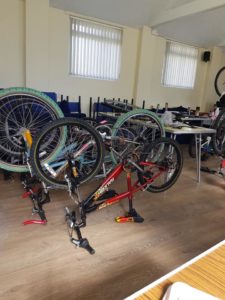