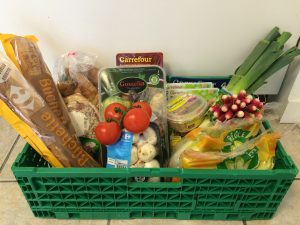 As a teenager growing up in the Caribbean island of Martinique, Jocelyn first learned to cook from his mother. It later became his career. Jocelyn says that “the relationship with my mother and spending time with her, learning what she knew how to do” is what ignited his love for cooking.

Forty-two years later, Jocelyn is cooking for his community and for the Lord.

In 1999, Jocelyn left the tropical forests and volcanic landscape of his French-speaking home to make a new home in the wide plains and sprawling, historic cities of France. One of his prayers was to find a church close to his home. After he arrived to Saint-Cyr-l’École, a town close to the affluent city of Versailles, he said to himself, “I have to find a church. My parents instilled this in me, I have to find a church in the community I am part of.”

One day, as he walked down a street close to the famous Palace of Versailles, Jocelyn noticed a chapel-like building. He saw a cross and English writing on a cornerstone, but he still went in. After meeting the pastor, Jocelyn became part of the Versailles Church of the Nazarene congregation.

Yet, he didn’t realize that this church would eventually rely on his cooking expertise to feed the hungry and establish a sense of community, both within the church body and with its neighbors.

The Versailles Church of the Nazarene has existed in this historic community for many years. Yet, it seemed to be invisible to the people who live in the surrounding neighborhoods. Until it recently began hosting community concerts, many people didn’t even know it was there.

In February 2015, the church became a food distribution center for the needy in Versailles. The idea came from a Nazarene pastor in Paris, José Monteiro, who is also a former supermarket supervisor. He knew that many supermarkets throw away food and household items that are slightly marred, or have passed expiration date, but are still perfectly good for consumption or use. He formed a non-profit organization in order to secure contracts with several stores, so they could donate these items to his Nazarene church instead. The church began a formal food distribution ministry in Paris that has attracted hundreds of economically struggling people. The Versailles church became interested in their successful model.

“At first, we were not sure that the vehicle of food distribution would work for our context,” Brian Ketchum, a Nazarene missionary in Versailles, said. “Versailles has always been regarded as an affluent area with a large percentage of its population seen to be members of high society. We began slowly as an additional distribution site for the compassionate ministry started in Paris, testing the waters to see if it would work. Within a short time we realized that not only did the need exist, but more revealing, we did not know our neighbors.”

Every Thursday, volunteers arrive at 11 a.m. to prepare the distribution. They stay until 3 p.m., when it finishes. Due to the timeframe, Jocelyn and Brian noticed that many of the volunteers would either not eat lunch until after 3, or would bring their lunch from home. Not wanting the volunteers to go hungry while they were feeding others, the team decided to prepare sandwiches for them.

As the volunteer group grew, Jocelyn felt in his heart that he should do something more. So, he started preparing meals for all the volunteers. In the beginning, it was a simple meal, like soup and salad. Then it evolved to full course meals, creating space to gather around the table and enjoy fellowship.

Through the distribution, awareness of the church’s presence in the community has grown in the past year. People who would go through the church’s door with the sole purpose of being served, started helping the small group of volunteers, and soon became part of the team.

“One of the fruits that we have seen is the way we have gotten to know people that we never would have seen before,” Jocelyn said. 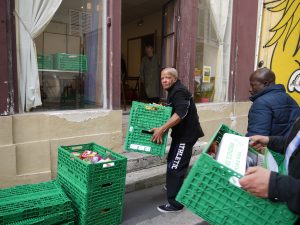 By opening the church for food distribution, the church members met for the first time about 20 people from the community who came to receive help. None of these people had ever considered attending a worship service at the church.

“But they came through this ministry of food distribution,” Jocelyn said. “And in cooking for them, while getting to know them and inviting others to come to a meal, it has become a place where we get to easily know each other.”

The distribution ministry is meeting the needs of about 20-30 families or individuals, according to Brian. These people have seen God’s love through the church members they meet on Thursdays. And that love has attracted some of them to join the congregation for Sunday services, too.

“What we are finding is that those people, because they have become a part of the family on the Thursday distribution, are coming in on Sunday and continuing that journey with us,” he added.

God has used Jocelyn to be a blessing beyond cooking on Thursday. He has become more open to people on the street and invites them to the Thursday distributions. Some accept the invitation and others do not, but it has become a way to share with people what the church is doing.

Jocelyn saw him sitting on the street one day, and noticed his fatigue. Jocelyn invited Jacques to come to the Thursday meal at the church, and Jacques came. Jocelyn offered him a cup of coffee and after spending time talking, Jacques said that he was from Guadeloupe, a neighboring country of Martinique. Jocelyn also told Jacques to take some food from the distribution and so they became friends. 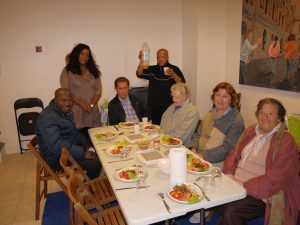 Due to a kidney problem, Jacques had been receiving dialysis three times a week, which caused his constant exhaustion. Jocelyn began visiting Jacques at home and cooking dinner for him. While together, Jocelyn would talk about God with him.

Jacques was on a kidney transplant waiting list, but his kidney function was declining, and so he had to be hospitalized. Before Jacques passed away, Jocelyn asked him if he wanted to accept Jesus in his life. Jacques said yes, and prayed to receive Christ. Because of Jocelyn’s close relationship with Jacques, he is now in contact with Jacques’s family and is being a blessing to them, as well.

Brian says the meal and distribution ministry “has sparked a desire to find more ways to creatively identify and meet the needs of the community. The church has regained purpose and a sense of identity as a body called to serve others and put into practice the love we profess to have for our neighbor.”