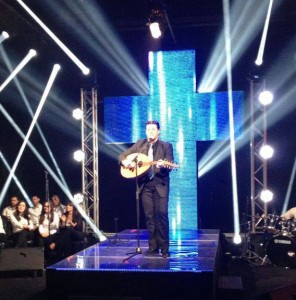 Beirut, Lebanon — The woman sent a text message to the phone number presented on the screen at the end of Is2alouni 3an Yassou3 (Ask Me about Jesus), a Nazarene program that aired on MTV Lebanon during the Lenten season.

A pastor who was designated to answer the messages of viewers talked and prayed with the woman. Joyfully, she sent a follow-up message: “Thank you very much. I was lost. You lead me the way to our Lord.”

It was just one of numerous encounters the team involved with Is2alouni 3an Yassou3 had with viewers across the Middle East and even in North America, as well as with the Lebanese celebrities who had cameo appearances in each episode.

“The feedback in general was so encouraging and it put us in place that we are thinking to seriously do season two of the show … for the year 2015,” said Ayman Kafrouny, the pastor of Bouchrieh Church of the Nazarene in Beirut, who produced, wrote and hosted the program.

The objective was to produce a quality Christian broadcast for Arabic-speaking people around the world in cooperation with MTV Lebanon, a secular station that wanted to run a Lenten-themed show in the 40 days leading up to Easter.

The program was 95 percent funded through Nazarenes’ offerings to World Mission Broadcast – a denominational ministry that supports the evangelism and discipleship efforts of various Nazarene radio, Internet and TV programs around the world.

Running in 32 episodes, Is2alouni 3an Yassou3 had a three-part format. In one part, a well-known Middle Eastern celebrity spent four to five minutes on camera, concluding with a theological question for Kafrouny. In a second segment, Kafrouny, who was a successful secular pop singer in the Middle East, led a band in two songs that lasted for eight to nine minutes. The third part was about 11 minutes of Kafrouny answering the celebrity’s question.

Among the celebrities featured in the program were a former first lady of the country, as well as actors and actresses, TV show presenters and well-known TV journalists.

One woman who is a well-known TV show host in Lebanon contacted Kafrouny to introduce herself and said she and her husband had been watching Is2alouni 3an Yassou3 and wanted to meet with Kafrouny and his wife, Grace. They plan to get together soon.

Another celebrity featured in the program is a Lebanese singer and movie actress. She invited Kafrouny and Grace to visit her family in their home. The two couples spent the evening talking and the Kafrounys shared the gospel with them.

“This for us is unusual,” Kafrouny said. “The Lord is opening doors with those celebrities to share our faith with them and to let them ask about Jesus more. I don’t know exactly what are their decisions, but we believe the seed we planted, the Lord will continue to work something through it using this program.”

Another woman saw the program in Raleigh, North Carolina, where she lived. She contacted the show and Kafrouny prayed with her on the phone, then connected her with a pastor near her in North Carolina.

“She was crying/sobbing the whole time on the phone,” said the pastor. “She [has] been saved through the TV show!”

Is2alouni 3an Yassou3 was the second program Kafrouny and his team have produced for MTV Lebanon. In 2012, he also produced a different Lenten program that now airs in reruns on a Catholic network.