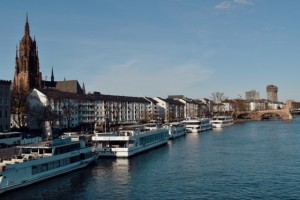 Frankfurt, Germany — The refugee situation that has brought over a million displaced people to the shore of the European Union also brought together 11 Nazarene leaders from the Northern Europe and Central Europe fields on April 1 in Frankfurt, Germany.

Hosted by Kirche in Aktion (KIA) Frankfurt, and facilitated by Nazarene Compassionate Ministries, International (NCMI), the meeting gathered voices from Germany, the Netherlands, Denmark, Hungary, and the United Kingdom.

The meeting’s focus was to explore a unifying compassion strategy for Nazarenes in Europe as the church responds to one of the most significant human migrations of our modern era. 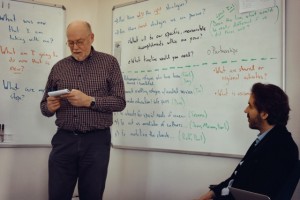 The discussions showed that European Nazarenes are intentionally engaging in effective and compassionate response. They also highlighted the fact that Europe is in the beginning moments of a long journey toward resettlement and inclusion of those who seek refugee status — those whom Emma Lazarus would have called “your huddled masses yearning to breathe free.”

Tim Bowen-Evans, NCMI Program Coordinator, said, “I have been really encouraged to see the passion and creative action being taken by churches throughout Europe to respond to asylum seekers as they transit through or try to settle into new host countries. The needs are overwhelming and change rapidly from week to week, so churches, along with everyone else responding to this current crisis, face many challenges in developing appropriate and effective response activities.”

The one-day meeting built upon a strategy base that was produced in December in Hungary with the Central Europe Field’s Refugee Response Team (read the story). The Frankfurt group specifically focused on a unified response to asylum seekers in destination countries. 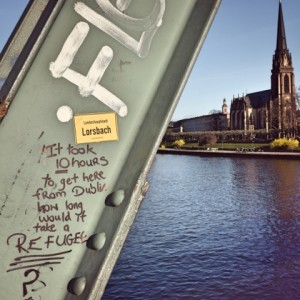 Central to the Frankfurt discussion is a common thread of belief among both theologians and practitioners that God is doing something unprecedented not only for the Middle East, but also for Europe. European Nazarenes are intentionally cultivating a narrative that this new reality of the broken and fearful arriving at its doors is an opportunity to re-awaken the Church.

In Germany, the innovative Kirche in Aktion [Church in Action] talked about a planned June 2016 community musical program called Bridges that will bring together famous musicians from Europe and the Middle East. A program of this sort is a significant statement about a Kingdom ethos of reciprocal hospitality.

”We must recognize that Syrians, Iraqis, and Afghanis have much to offer our [German] society. While their gifts are not only in the realm of music, Bridges is an opportunity to take that first step in both welcoming guests and appreciating the contribution that they make to us,” said Robert Stosser, project manager for KIA.

Those who work with refugee communities acknowledged that the “otherness” of such a large number of people can be a disconcerting factor for a host community. However, Rolf Noordhof, appointed by Regional Director Arthur Snijders to represent the Netherlands, observed that in neighborhoods where Dutch people proactively and compassionately engage new asylum seekers, fear is minimized by compassion. What develops very quickly is a grassroots support group, often linked by Facebook or other social media sites, that works toward a positive welcome. In the process, God’s prevenient grace can be seen effectively ministering to both volunteers and the newest members of society. 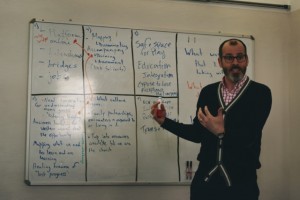 NCMI Mentoring Program Coordinator Brandon Sipes, who facilitated the meeting, helped the group appreciate the scope of the journey faced by asylum seekers. “Most migrant asylum seekers will spend up to 17 years in some sort of temporary residency status, often in large camps or underdeveloped urban areas.”

Another sobering fact, said Sipes, is that only 1 percent of 60 million people currently displaced globally will receive official refugee status. In essence, this is a generation in limbo on the heels of the significant trauma of war. Yet, every number represents a story.

While in Germany for the meeting, Sipes connected with Saeed, an asylum seeker he met in Serbia who is now living in Berlin. He and eight members of his family live on a covered soccer field with two hundred other migrants. Saeed, said “All day long I work on speaking German so that I can gain residency and find work. But I often feel shame for the way we are living.”

The December meeting in Budapest and the April meeting in Frankfurt are proactively compassionate steps toward a hope eloquently expressed by Sipes – a catalyst of ideas to be incorporated into the life of church and community. He went on to summarize, “How well our churches embrace those who are arriving in their communities will determine not only the migrants’ health and well being, but will also affect the long term stability of their communities and, I’d even say, their nations.”