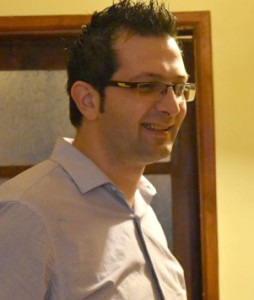 At the age of 27, Ergest Biti is the youngest pastor in Albania’s evangelical community. In January 2016, he was elected to the role of General Secretary of the Evangelical Alliance for the Albanian Church by his significantly older colleagues. This election brings to fulfillment a dream given to an elderly lady in the church where Biti became a believer years ago.

She had told the Christ-follower that one day he would be the pastor of the Albanian church. As General Secretary, Pastor Biti now holds the responsibility of guiding the Alliance’s 140+ registered churches in a country whose majority population has a different faith system.

Biti is also the pastor of the Nazarene church in Tirana and he serves as president of Nazarene Youth International for Central Europe.

As Biti looks back at that elderly woman’s statement, he is amazed at how “pastor of the Albanian church” now relates to his three different roles.

A 2012 official consensus cited just 3,000 evangelical Christians out of the country’s population of 2.7 million. Biti suggests that the evangelical numbers are significantly higher, estimating 7,000 to 10,000 believers. Yet, Biti says that most Albanians do not understand what the term “evangelical Christian” means.

“When you say ‘church,’ people immediately think Orthodox or Catholic.”

This connection is heavily influenced by the Catholic community’s ethnically Albanian Mother Theresa, born in the neighboring Former Yugoslav Republic of Macedonia. With the addition of Catholicism and Orthodoxy, around 40 percent of Albania’s population is Christian, making it a minority religion.

Biti’s new role is significant, charging him with the task of representing the evangelical community to the government, and speaking influentially into laws that affect religious equality, the representation of religion in textbooks, as well as bringing unity among evangelical churches.

“Getting Christians to work together can be hard,” says Biti in reference to the question of unity. The challenge is that Albania is a geographically large area with relatively few evangelical churches for the size. Bringing people together is both an economical and a geographical challenge. To this end, geographically linked local churches regularly gather in regional alliances and the Albanian Evangelical Alliance, over which Biti now presides, meets twice per year.

While gathering for official meetings is important, Biti believes that the key to unity comes through personal visitation to local communities. Since his election, he has begun traveling to individual churches in an effort to encourage pastors in ministry and to be a bridge between local congregations. He gives an example of a local body of believers in the south of Albania who are partnering with an orphanage.

“A few years ago, the orphanage held 30 children ranging in age from 2 weeks old to teenagers. The church people began to proactively seek adoptive families. There are only 12 children left in the orphanage now.”

Biti uses this church as an example of how a local community of faith is doing something beautiful, but that the initiative could be made stronger by working together with other Christian congregations.

Biti is finishing the Nazarene Course of Study for ordination and is married to Eda Xhakollari, who is an ordained deacon on the Albania-Kosova District. They have two young daughters.

When asked about the many responsibilities that he carries at such a young age, Biti responded, “We might not think it is God’s time, but it can be God’s time for a person to lead. God has been preparing me from a young age and I will trust him to help me.”

— This story was originally published in the April 2016 edition of Where Worlds Meet, the monthly newsletter of the Church of the Nazarene Eurasia Region.