When Phil Rawlings received an invitation to visit No. 10 Downing Street, the iconic address for the United Kingdom’s Prime Minister’s office in London, Rawlings was understandably skeptical. He called the phone number provided, and was surprised to learn the invitation was real. 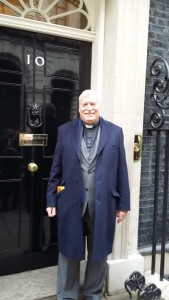 Rawlings is co-founder and co-director of the Manchester Centre for the Study of Christianity and Islam, at Nazarene Theological College-Manchester (NTC), which provides training for Christians in how to love and engage relationally with Muslims. He is also the interfaith officer for the Church of England in Oldham, a borough of Greater Manchester where Muslims make up about 20 percent of the residents. In this role he also provides training for local Christians in how to communicate with Muslims and build relationships with them.

It is because of his interfaith work, Rawlings later learned, that he received the invitation to join the Prime Minister’s gathering for Easter. Most of the others attending were Christian leaders in the UK, such as the head of the Coptic Orthodox Church, the head of the Greek Orthodox Church in Britain, the first woman bishop in the Church of England, the Archbishop’s interfaith advisor, among others. There were also at least half a dozen Muslim leaders who attended.

“It was a fascinating experience,” Rawlings said. “I met some of the Prime Minister’s advisors who are very committed Christians… which I found really encouraging.”

The invitees mingled over finger foods and drinks, an a capella group sang Christian hymns, then Prime Minister 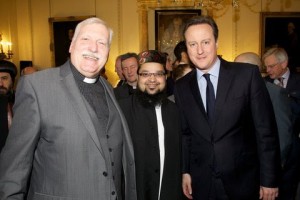 David Cameron arrived and spoke for about 10 to 15 minutes about his own Christian faith, also describing Britain as a Christian country.

“He said we needed to affirm Christian values at the heart of the nation,” Rawlings said. “He affirmed Easter is the most important festival in the Christian calendar.”

According to a Bloomberg report of the event, Cameron, who spoke positively about the role of faith in public life, urged the Christian leaders to “reach out to Muslim communities and offer support in fighting extremism.”

Rawlings said the reception created opportunities for leaders in the faith community in the UK to become acquainted with each other.

“There are a number of contacts there which should produce significantly fruitful relationships in the future. It’s the sort of thing you can email somebody and say, ‘We met at No. 10,’” Rawlings said, grinning.

The Manchester Centre for the Study of Christianity and Islam is designed to equip people and churches at the grassroots, both within and beyond the Nazarene denomination, to seek out encounters with Muslims in their own communities. Co-founder Dwight Swanson is a senior lecturer in biblical studies for nearly 20 years at NTC.

The centre develops specialist classes and programmes to more firmly and deeply root Christians in the tenets of their biblical faith while at the same time preparing them for participating in informed, respectful, and loving dialogue with Muslims.

MCSCI is available to Nazarenes on the Eurasia Region and globally who would seek out learning, dialogue, and equipping for interaction with their Muslim neighbors. For more information, visit mcsci.org.uk.