Nazarenes in Nepal have been persistently pushing forward in all their district’s ministries across the country for the past year, in spite of a massive earthquake in April 2015 that devastated entire communities, and a border blockade that started in September 2015, ending only in February 2016.

The border between India and Nepal was closed due to political disagreements. Because Nepal imports all its fuel through India, this created a fuel shortage. Additional, unrest throughout Nepal added to ground transportation interruptions.

In spite of limited movement throughout the country, and resulting slower-than-expected progress in some ministries, the district organized 11 churches in 2015, with more than 700 new members received. 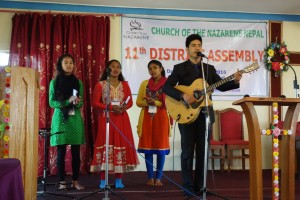 “Though we were able to organize only a few churches, we are not disappointed,” said Nepal District Superintendent Rev. Dilli. “We rely on God and on His strength. We pray for His help and guidance as we participate in the works to expand His kingdom.”

Church planting was less than had been planned, but is explained by the fact that workers diverted their efforts from normal activities into earthquake emergency relief and recovery programs, according to Rev. Dilli’s report to the district assembly on 14 February. (Read more: http://www.ncm.org/nepal-earthquake.html)

Since then, the district has continued with its holistic ministry efforts, such as a new partnership with Humedica, a medical NGO in Germany, to sponsor 200 carefully selected families over three years to bring significant changes to their socio-economic status. NCM Nepal also is applying for funding to establish child-focused community development projects at four village development committees, a program expected to last 3.5 years. And the district is still working on long-term rebuilding for families in earthquake-affected areas.

Effects of the fuel shortage

“To visit a project site, it was only possible to go there through motorcycle because the Landcruiser uses too much fuel,” Eich said. “When I bought fuel, it was about 3.50 euros per liter – very expensive. That slows down everything.”

“If you want to travel from one place to another place, they have a protest on the highway and have blockage from cities to cities and towns to towns,” Rev. Dilli said. “About 200 kilometers of highway links Kathmandu to the eastern part. The southern plain belt of Nepal was badly affected. Vehicles were not allowed to run in this section of the road and, if found, vehicles running there could be burned, damaged or destroyed by masses of protesters. This is the reason, there was no daytime bus services for people traveling to Kathmandu from eastern Nepal and vice versa for more than four months…. To avoid long and exhausting travel people needed taking flights.” 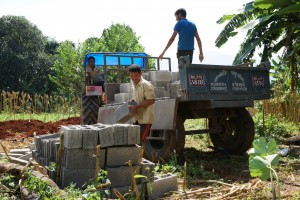 As a result, various non-profit organizations have been struggling to help people who lost homes in the 2015 earthquake to rebuild with earthquake-proof materials and designs, according to Eich. The border closures meant that shipments of materials from outside Nepal have been delayed. With lack of fuel, delivery of those building materials within the country to reconstruction sites was often interrupted.

Fortunately, the fuel shortage did not seem to affect attendance at Nazarene local churches and child development centers because the buildings are within walking distance of their regular participants and activities normally occur during daylight hours.

JESUS Film teams continued ministering during the fuel shortage, but required extra persistence in reaching areas they’d chosen to share the film and invite new believers to participate in discipleship.

“Even in this situation, our team did not stop our task,” wrote one JESUS Film team in its monthly report. “We were inviting all village [residents] door to door [to watch the film.]”

Another team wrote about one JESUS Film trip: “The border has been blocked for a long time, so in these days no gas, no fuel in the whole country. No vehicles on the road. All Nepalese people have been suffering. We continued traveling eight and a half hours…. Physically we became weak. When we reached the village it was so dark already.”

People traveling to this village accompanied the team and helped them find the way in the dark. Then the team showed the JESUS film with 150 people in attendance, and some expressed a desire to follow Christ, including the family who had guided the team to the village.

Meanwhile, even in the best of times, electricity is often unreliable in Kathmandu, which means there are frequent power cuts to the Nazarene District Center. However, in those times, the center could rely on fuel-powered generators when government-provided electricity was off. Without consistent supplies of fuel, computers, phones and Internet were inaccessible for many hours of each day without the center’s back-up generators, according to Dilli. For this reason, Eurasia Region Communications had difficulty reaching the center staff during the past several months. 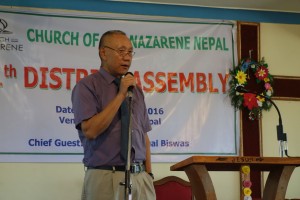 “This really discourages not [just] me and my team and the staff in the center, but this has discouraged a lot of people in the country,” Dilli said, when power was on for a few hours on February 10. “Strikes and minor problems, this and that, it’s very common over here. But border blockage we are facing this time, it’s quite different and strange.”

The two to three hours of electricity per day were unpredictable and might even happen in the middle of the night, meaning missed opportunities to charge dead cell phones and laptops. Many people in the cities and towns resorted to outdoor cooking over wood-fueled fire in order to eat. Yet, even this was not always possible: for families renting houses, there may not be enough space outside to cook. And rooftops were reserved for use by the landlords.

“Thus families living on rented houses had to find cooking place either on the roadside or in an open field,” Dilli said. “More difficulties they had to face when there was rain and wind while cooking outside the house. Most of the time, families fed ready-to-eat junk foods, such as dry packaged Ramen noodles or potato chips, to their children before sending them to school. This situation compelled several families to leave their homes in the cities and towns and move back to their villages.”

The district is developing a proposal for funding to install solar powered energy panels at the district center, where the city is blessed with some sunlight nearly every day of the year. This will provide more consistent electricity so the staff at the center can work normal office hours and be able to communicate regularly with Nazarenes across the country and internationally.

On February 14, the district held its annual assembly. In addition to the churches that were reported organized in 2015, the district has set a goal to organize 30 additional churches in 2016, and a total of 115 within three years. They also plan to start 45 mission churches this year, and build four ministry centers.

The Nepal Nazarene church has set a goal to train 300 people in disciple making movement and church planting in the next three years, and want to become a self-supporting national church by 2017.