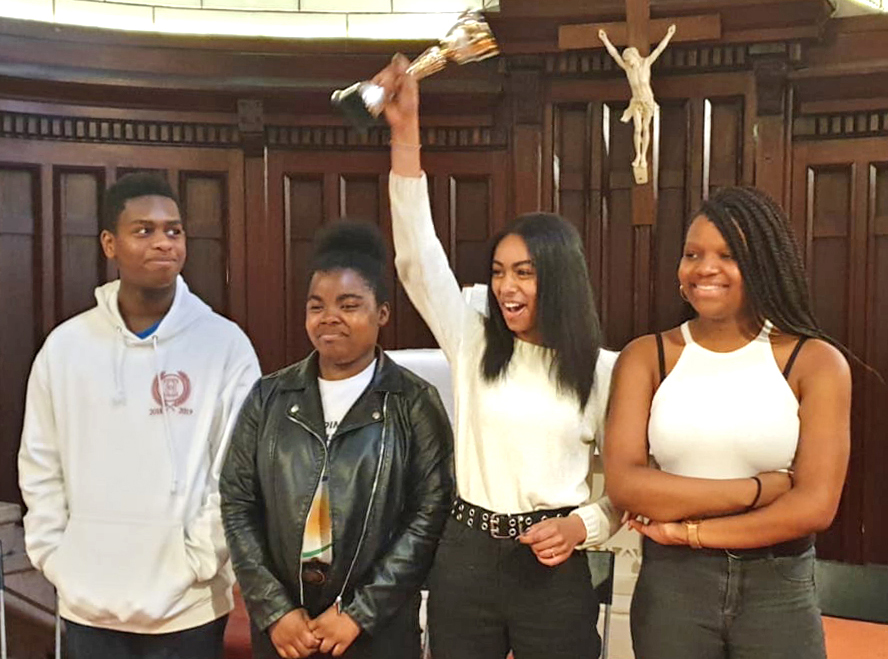 What can make a child excited about being part of a church, and passionate about studying God’s word?

“A mother came up to me at church on Sunday and shared that her son came up to her earlier that morning and asked if they were going to church,” Yacine said. “When the mother answered that they were, the son let out an enthusiastic ‘YES!’”

As France is a very secularized country, it is rare for kids to meet other believers outside of their local church. It would be unlikely that any of them have another believer in their grade, or even in their whole school. Through quizzing they are meeting other Christian kids and building relationships beyond their local church, while also memorizing scripture and learning more about the truths and promises of God within the Bible. 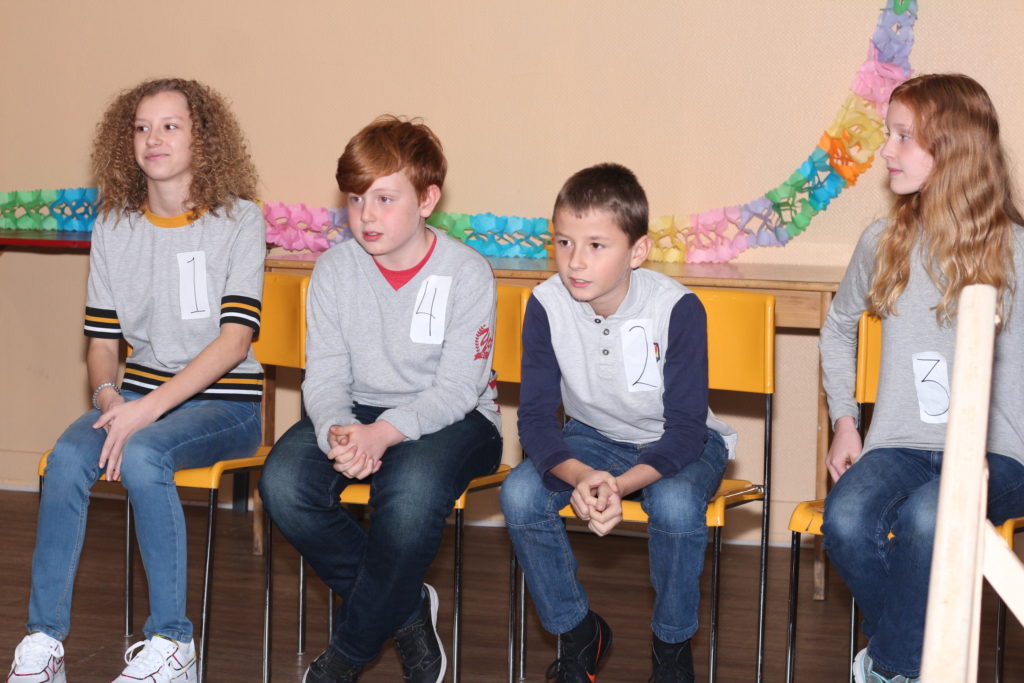 At the beginning of the school year, Yacine Monteiro, Sunday School and Discipleship Ministries president for the France District, proposed holding a district-wide quizzing competition. It had been more than 15 years since the France District had done anything like this. Yet, the Sunday School representatives excitedly embraced the proposal, confident the kids were ready for the challenge.

Six out of the district’s nine churches have participated in the quiz meets so far. The quizzers’ ages range from three to 19. Teams from each participating congregation were organized as “Petits,” “Moyens” and “Grands” groups (or Small, Medium and Big). Each team has three to six contestants. The youngest group of 3- to 5-year-olds participate by memorizing a specific verse, while the other groups are asked to have in-depth knowledge of verses memorized from the assigned chapters.

The leaders are grateful for the quizzing material that the Wesleyan-Holiness Digital Library (https://www.whdl.org/) has available in French. Yacine provided quizzing coaches with a copy of Discovering John: Bible Study and Quizzing for Youth. 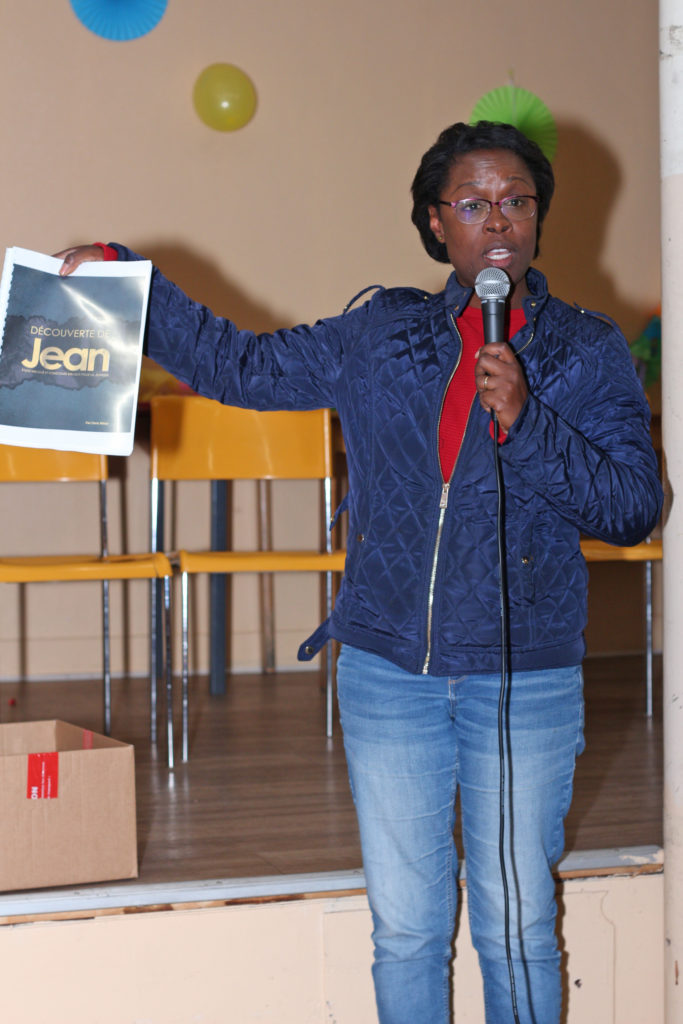 The Paris 17th congregation hosted the first competition on 19 October 2018. Much to everyone’s surprise and delight, more than 70 kids filled the room. Parents and coaches alike were amazed at how the kids answered questions and recited verses without hesitation. It affirmed the vision to reintroduce quizzing on the district.

The robust participation included a new team from one of the Paris congregations. For this final meet, Yacine asked that the kids be prepared for five additional bonus questions, in which they would have to complete Bible verses from certain chapters of the book of John. The kids would hear the reference and a beginning part of the verse, and the first to stand would have to complete the verse from memory.

A team member from the Egyptian congregation in the “Moyens” group was unstoppable. Rather than waiting to hear the first words of the bonus verse question, the boy would jump when hearing the verse reference and recite the entire verse from memory.

Announcer Brian Ketchum later said,  “This 6-year-old boy had basically memorized two entire chapters of John, word for word. There was no way he knew what verses were going to be used for the bonus questions. He was quite impressive!”

The participating churches demonstrate the pride they take in hosting the meets by decorating their meeting halls and preparing little bags of candy for each child. Yacine provided trophies and medals to award the winning teams and participants for all the hard work they had put into learning Scripture.

Safira Patrascu, mother of two of the quizzers from the Versailles congregation, said that having her kids participate in quizzing “was a really good thing. The kids were able to interact with other churches, usually so isolated. Moreover, they were eager to learn the Word. It was very positive.” 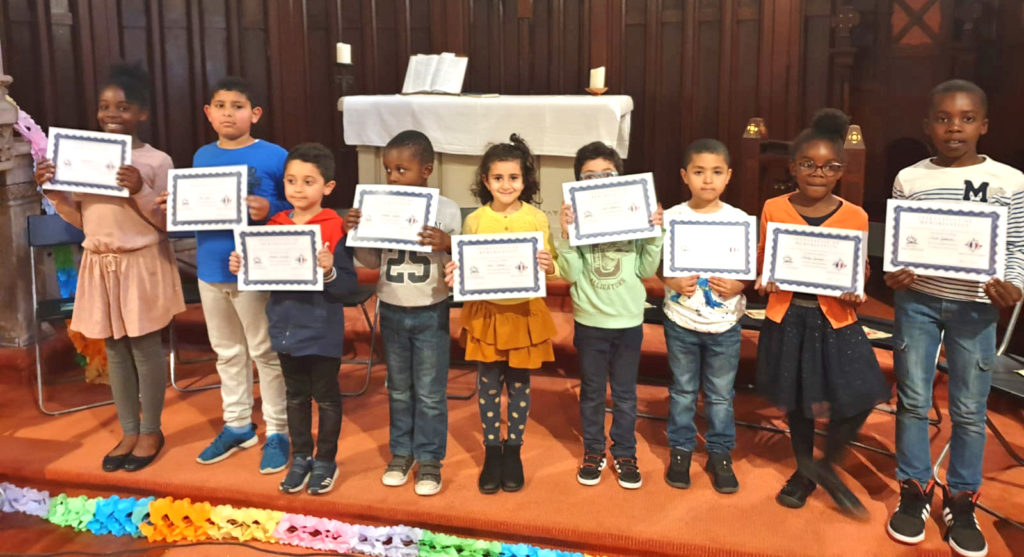 Yacine wants to encourage other districts that are similarly still in process of developing their Sunday School programs with some advice on starting a quizzing program: “The first thing to do is to make the local Sunday School presidents aware of the merits of quizzing. You need to be surrounded by people who share this vision. Then you have to make the young people aware of the playful and competitive side of the ministry. And finally, start with an exhibition match.”

Each competition has come along with its own learning curve. While working hard to follow all the official quizzing procedures and rules they have also learned that they have had to adapt it to the small and diverse district.

Everyone leaves the competition encouraged by what they have accomplished, and eagerly anticipating the next quiz meet.

The main goal is being accomplished: kids are working together in a joyful atmosphere, and excited to learn the word of God.

This article was written by Erin Ketchum and previously published in the August 2019 edition of Where Worlds Meet.

The first Nazarenes in a new country

The sick will be made well