Albanian church gives so others can have buildings

Albanian church gives so others can have buildings

The Church of the Nazarene in Gorre, Albania, worships in what was formerly a community center built in the Soviet era as a lunch space for laborers. Pastor Ermal Gjermeni remembers eating meals with his father there when Ermal was still a child. 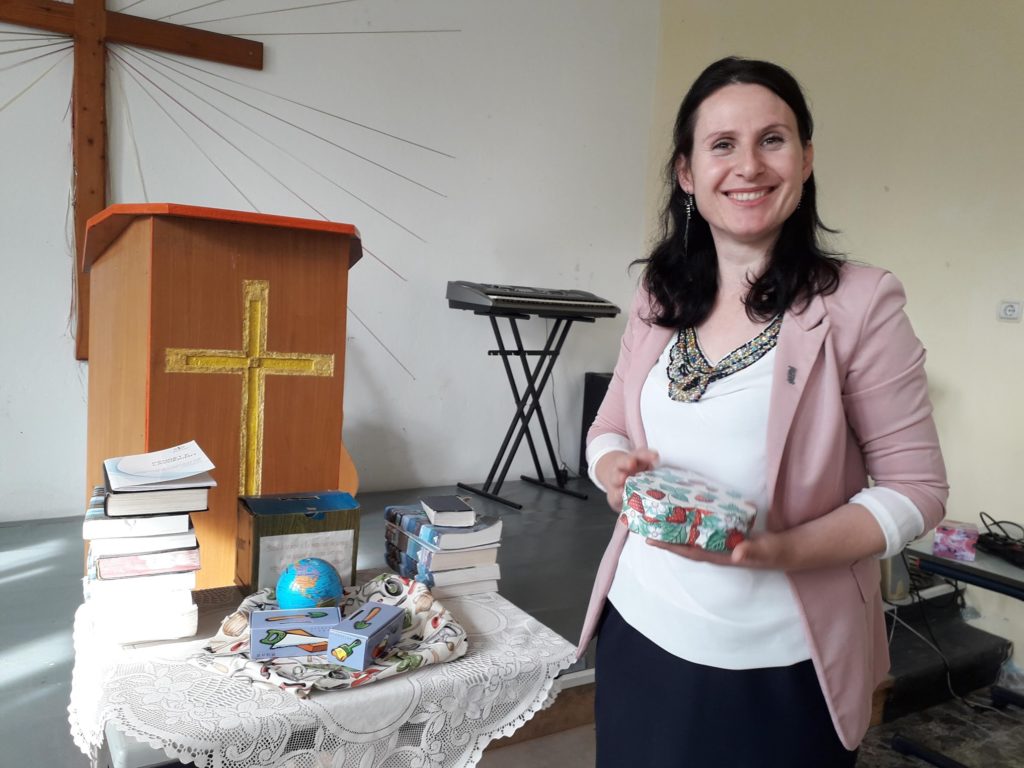 As a beneficiary of global Nazarene Alabaster Offerings in the past, the Gorre Church of the Nazarene gives generously every year to the fund so other Nazarenes globally can have buildings, property and expanded ministry. Nertila Gjermeni (pictured) helped lead the offerings as a district missions president.

Today, this building offers the far more lasting spiritual food of God’s truth and love. The church owns this building thanks to the Nazarene denomination’s global Alabaster offering.

Nazarenes around the world sacrificially give to the Alabaster Offering once or twice a year so that land and buildings can be purchased for churches, schools and other Nazarene ministry. Often, people save their spare change throughout the year by slipping it into a specially designed “Alabaster box,” and then “pour out” their offering on their local church’s Alabaster Sunday when the offerings are received.

When Nertila Gjermeni, Ermal’s wife, agreed to become the church’s president of Nazarene Missions International, she was unfamiliar with the annual Alabaster Offering.

“I discovered that the church building, where we are also living, was built from these little coins that have come from the bottom of everybody’s heart. This touched my heart so deeply,” Nertila said. “I was so happy that I am living in a building that is built from a generosity offering.”

Gorre is an agricultural village in west-central Albania. In 1993, Gorre was the community chosen for Albania’s first Nazarene mission. The Albania-Kosova District purchased the building in part through the denomination’s Alabaster fund.

In gratitude for this gift, Nazarenes in Gorre are passionate about giving to the Church of the Nazarene’s global Alabaster offering so that other churches around the world may have their own land or building, too.

The Gjermenis know many other Albanian congregations of several denominations who do not have their own church buildings, nor are they able to rent adequate space. Rent prices are beyond many churches’ ability to pay, and likewise buying land and constructing a building.

As a result, when Nertila served as the district president, she promoted the Alabaster offering for a full month. She purchased small, heart-shaped boxes in which members collect their offering over the course of the month before they bring it to the church on Alabaster Sunday.

“It’s a very simple box, but it means a lot in our church. They give beyond their incomes,” she said. “Sometimes they can’t wait to give to Alabaster.”

Nertila said that an 84-year-old woman in the village, who has not yet given her life to Christ, gives to the church’s Alabaster offering every year. She has seen the central role the church plays in the community, through caring for and discipling young people, and encouraging young people to trust God to stay in the village and start small businesses, rather than emigrate for work.

On the ground floor is the sanctuary, a sports room, a library, and storage for the Gjermanis’ beehive equipment. As a bivocational pastor, Gjermani discovered he had more time for ministry if he quit his job as a school teacher and ran the small business of beekeeping and selling honey to supplement their income from the church.

Several Work & Witness teams built a second story. One half is dedicated to group accommodations and a kitchen. That space is used as a Learning Center for local students enrolled in European Nazarene College (EuNC). The other half is an apartment that serves as the parsonage.

Behind the church is a football (soccer) field dedicated to the church’s thriving sports ministry with children and youth. In the winter, when playing outside is not possible due to inclement weather, the youth use the indoor space to play games.

Nertila noticed the irony that the sanctuary used to be a dining room for laborers.

“At one time we came here to eat food, but now they come to eat something that is spiritual,” she said.

This article was written by Gina Grate Pottenger and previously published in the August 2020 edition of Where Worlds Meet.

Meeting in a former Communist-era dining hall, the Church of the Nazarene Gorre now offers the bread and water of life to their community. Gorre is where the denomination first established its presence in Albania.