“One day this summer I was walking through Kombinat,” Gesti remembers. “There were a few young guys and I knew one of them, so I called to them and asked, ‘What are you doing right now?’ And they said, ‘We are just hanging around and not doing anything special.’ But I knew that some of them had already started stealing, and I thought that these guys, starting to steal at this age, would pretty soon be in a very bad way, that soon they might be in prison or starting drugs. This is the area where most of the teenagers start drugs and become addicted.” 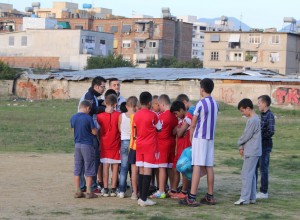 Ergest (Gesti) Biti, pastor of the Kombinat Church of the Nazarene in Tirana, Albania, knew that this meeting was from God. And he knew that he couldn’t just let these young boys follow the path to ruin where so many had gone before.

“I asked them: ‘What if I start a football team and I can be your coach, would you like to come?’ They were all really happy.”

The boys could barely believe what they heard – and hardly believed that Gesti really meant it. But he did.

The next day at 6 p.m., Gesti came to the field where they had agreed to meet him with some of their friends so they could make a team. When he arrived at the field, 17 young boys were waiting for him – and as soon as they spied him, ran towards him calling “Coach, coach!”

When they realized he hadn’t brought a ball – he thought the boys had one – they immediately started doubting his sincerity. But Gesti simply took two of the boys to the next shop to buy a ball.

“When we went back to the field, they were all waiting there, and one kid, he took the ball and started crying, he was so happy.”

Before they started, Gesti made some simple rules: no bad words, cooperate with each other, start each practice with a prayer to the Lord Jesus. All the boys agreed. So they proceeded to have a game and play together, and at the end Gesti chose one of the boys as captain and left the ball with him to bring to the next practice.

“They were so happy because they saw that I trusted them.” 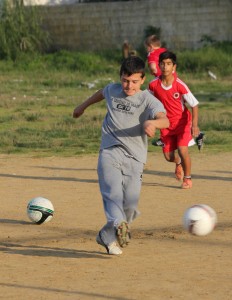 Since the beginning of July 2015, the Kombinat Nazarene football (soccer) team has been meeting three days per week on a public playing field. Around 22 to 35 kids aged 9 to 12 attend regularly. Gesti was joined by Andi, a young man from the church, to help lead the practice. They usually meet for about an hour to exercise together, practice some football moves and have a game. Thanks to donations they were able to buy additional balls and other exercising equipment – including uniforms for each child in the Albanian national team’s colours: “It really made them into a team.”

But what is a team without a victory?

When Gesti arranged a trip to Lushnje, a small town about 1.5 hours south of Tirana, to compete against the kids there, the football boys showed up at the church at 7 a.m. even though the bus wasn’t leaving until 9.

“Some kids told me, ‘We couldn’t sleep all night because we were so excited to go there!’” Gesti said. “That was such a great experience for the kids. It was something different for them, and we were really glad to see those happy faces.”

Of course, the Kombinat Nazarene team won the match, and when the victorious youth returned home late in the afternoon, some of the boys found an Albanian flag and marched around the Kombinat city centre, singing “We are the winners!” at the top of their voices. While people were looking on and wondering what had happened, Gesti thoroughly enjoyed the scene. “That really makes my heart happy, to see these kids so happy.” 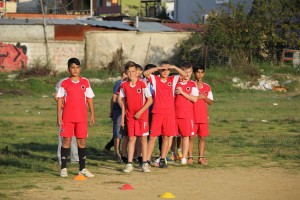 The football team is the only social program offered in this community. But it’s not just a social program. Every practice is started with prayer, and at the end Gesti or Andi always share a short message with the kids. A number of the boys have started attending the Saturday kids meeting at the Kombinat Church of the Nazarene. During the school year, fewer boys can attend the football practice because they have school in the afternoon, but still come to the church on Saturdays.

They can feel that there’s something different about Gesti and the people from his church. Something many of them have not experienced before: people who love and care about them.

“Most of those kids are from poor families or from families that are not very interested in their kids. From the families most of the ones I have seen, it’s like they don’t have a connection with their parents. Most fathers are unemployed or alcoholic that abuse them; many of the kids don’t have bread to eat before they sleep at night. That’s why most of those kids start stealing at this age and getting in a bad way.”

The church has made a difference, and Gesti prays that he may be able to continue offering this service.

“The kids feel that we care for them and we’re always telling them that we love them and that’s why we are doing that.”