Dordrecht, the Netherlands – Ilse was reluctant to visit the new Nazarene church near her home, even though her social worker thought it would be good for her. The 70-year-old Dutch woman had recently divorced from her husband of 39 years, and her son’s family lives in England. Now she resides alone.

Ilse has suffered with depression and poor self-esteem throughout her life. She has attempted suicide many times — beneath the sleeve of her sweater remain the thin, white scar lines.

It’s not that she had never tried church. But she has bad memories of the church she attended as a youth, which she describes as legalistic and judgmental, amplifying her lack of self-worth. 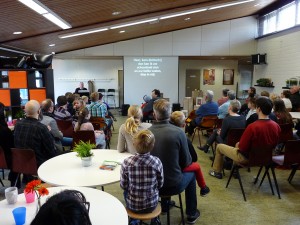 The social worker persisted, until she allowed him to take her one Sunday about a year ago. At first she visited once a month. Then twice a month. Now, every Sunday.

“During the week, I feel terrible, but when I come on Sunday, all the bad feelings go out. Here, it’s very warm. I feel like here… ” and then she demonstrated a hug.

Ilse says the people at the Nazarene church love her and welcome her, and she’s been learning about God’s love.

“I need Him, I need Him,” she said with a smile, and points upward.

Within that context, about four years ago the Dordrecht church began dreaming of developing a missional outreach to reach completely unchurched people. Dordrecht’s population is 130,000, but some of its neighborhoods have no church presence.

Pastor Michel Meeuws noticed that one of his lay leaders, a neighborhood chief of police named Bas Breekveldt, has the qualities to be a missional church planter. Breekveldt agreed to lead a pioneer effort in addition to his full-time night shift work, and eventually eight people from the congregation, including his wife, Inge, joined him.

The church prayed and fasted for three Saturdays, seeking God’s leading, particularly about where to start the new work, Meeuws said.

“There are a lot of churches, but we started looking for a neighborhood where there is need,” Breekveldt said. “The people in need are the ones who are open to all kinds of questions.”

The group researched different areas where they could work, and through a process of elimination narrowed the possibilities to Reeland, an economically struggling neighborhood with no other church presence. Then they formed a two-part strategy to launch the work: 1. Voluntarily doing community improvement work and helping people with practical needs; 2. starting a loosely traditional Sunday worship service where people they meet could come together for social interaction and to learn about God.

They went into the community to pick up trash and organized a barbecue so they could start meeting people. They also joined with existing organizations to support their community work.

The Kruispunt church, which now numbers between 30 to 40 adults, meets on Sundays in a school.

The core of the Sunday gathering is a meal, usually soup and bread with some sides.

“Because Jesus eats with everyone, he invited himself to all kinds of people and they eat…. It binds together. So that’s where we started. We want to eat,” Breekveldt said.

The group at first wanted to make their gathering very different from a traditional church service so the unchurched would feel comfortable. Yet, when it came time to design the gathering, it was hard to imagine something different.

“These are people who have been Christians all their lives, so 30, 40, 50 years; they don’t know anything else but being a church like we know here in Holland – mostly the Reformed church. So you have a clear liturgy that this is what we do, you just sit and listen, you sing your song, you listen to a sermon and you go home.”

Eventually, the team found a format that worked.

The Sunday worship services are casual, with a 10 a.m. prayer time, a 10:30 coffee and cake fellowship as people begin to enter the building, and then a short 11 a.m. worship service, with a few songs, and a brief, simple sermon. At the conclusion, the team offers creative opportunities for active response to the sermon. For instance, one Sunday the group was invited to nail to a wooden cross pieces of paper on which they had written their burdens.

Kruispunt also offers the Alpha Course several times a year. Alpha is a 10-week introduction to faith through discussion and study. In the first series, about 16 people participated; the second series, there were 12. A new Alpha Course is planned for this fall. 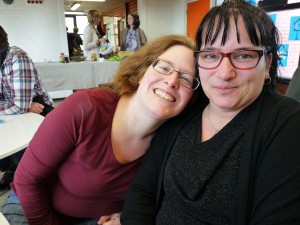 A year ago, Natascha Kleton van Gils’ neighbor invited her to visit the church. When she heard about the Alpha Course, Kleton van Gils (right in photo left) decided it would be a good way to learn more. After six weeks she said, “I think I’m going to just start to believe.” She accepted Jesus as her Savior. The panic attacks she had suffered from gradually ceased. Although her neighbor no longer comes, Kleton van Gils is a regular attender, and is going to start helping with children’s Sunday school. Now her husband and son are coming as well.

“They are further than we expected them to be,” Meeuws says of Kruispunt’s development. “They are getting non-Christian, postmodern people. They are not getting church people, and sometimes they have 70 or 80 people.”

Meeuws, who is studying for a master’s degree in missiology, said it is projected in 10 years more than 1,000 established Dutch churches will disappear, and will be replaced by a movement of small, unconventional churches in unreached neighborhoods. The Nazarenes in Dordrecht want to be on the cutting edge of that social shift.

Encouraged by Kruispunt’s growth, the Dordrecht church is planning a second church plant. They’ve chosen the neighborhood and are talking to a potential pastor to lead the effort. They may try a different method to get the new plant going, as Kruispunt took a lot of time, energy and money to get started, Meeuws said.

Although the neighborhood demographic will be different and the approach may be different, the message will be the same: No matter who you are, you are welcome.

“People [will come] who will never want to or have never had the experience to be seen and be welcomed the way they are. That’s why we really try to proclaim, ‘You are welcomed just the way you are,’” Breekveldt said. “After that we will see who you are and that’s OK. God loves you.”

— This story was originally published in the April 2016 edition of Where Worlds Meet, the monthly newsletter of the Church of the Nazarene Eurasia Region.