Eurasia missionaries commissioned by General Board 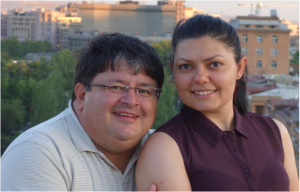 Trino and Anna Jara and Martin and Cezarina Glendenning were commissioned as Global Missionaries in the Church of the Nazarene at the 2016 General Board meetings held in Ede, Netherlands, on 29 February.

During a special evening service at the conclusion of the gathering, the Glendennings and the Jaras were joined by five other couples, all of whom have been journeying through a process as intern missionaries in various assignments in the Asia-Pacific, Africa and Eurasia regions.

The missionary candidates had five days of retreat and training sessions leading up to interviews by the Global Mission Committee of the General Board, as well as the denomination’s six General Superintendents. The couples were asked about their personal testimonies, and sometimes other spontaneous questions, such as how they have experienced entire sanctification.

The weekend concluded with the service, during which time the candidates were presented to the board, several songs were sung together, Scriptures were read, and the General Superintendents laid hands on the missionaries to pray for them and their families.

Trino and Anna Jara are serving in the CIS Field and in global NCM.

Global Missionaries are understood by the denomination as people who have sensed a call from God to give their lives into full-time, cross-cultural ministry, using their unique gifts and talents and experiences to fulfill a specific assignment. These missionaries have agreed that they are willing to go anywhere the church sends them.

All candidates have several years of experience serving in their assignment before being commissioned. The Church of the Nazarene denomination currently has sent out more than 700 missionaries, who are serving in about 40 world areas. About 40 percent of Global Missionaries originate from outside the United States. 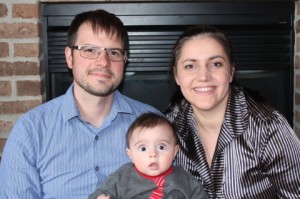 Martin Glendenning, from the U.S., has served at the Eurasia Regional Office in Büsingen, Germany, as the regional finance coordinator. He grew up the son of a Nazarene pastor. It was while studying for his accounting degree and involvement with several mission trips that he experienced God’s call to missions.

While in Büsingen, he met Cezarina, who was studying for her BA in Theology at European Nazarene College.

Cezarina grew up in Albania, and found Christ through the Nazarene church. She moved to Florence, Italy, to study engineering and became involved in the local Nazarene church as a lay leader. While there, she fully committed her life to serving God and the church, and relocated to Büsingen to study for ministry at European Nazarene College.

In 2012, they were married. In 2015, Cezarina was ordained. She is the region’s prayer and fasting coordinator. Together they work with the youth of the Gottmadingen Church of the Nazarene on the Germany District.

Their son, Reuben, is about 18 months old.

Trino Jara was born in Costa Rica and found the Lord at age 15. He gave his entire life to God at a regional conference in the Mesoamerica Region. For 10 years he worked for different non-government organizations in Costa Rica. Then he gave 10 years as regional NCM coordinator for the Africa Region. In 2008, the Church sent Trino to serve in the Eurasia Region to lead compassionate ministries for the CIS Field. Today, he has added the roles of Armenia District Superintendent and Eurasia Region Holistic Child Development (HCD) Coordinator, as well as global HCD coordinator for the church. He was ordained in 1997.

Born in Armenia, Anna gave her life to the Lord in 2009 during a church camp. She began helping with children’s ministry at her local church, and as she deepened her walk with the Lord, she also was given more leadership experience. She took the role of district secretary, and district NCM coordinator.

In 2012, the Jaras were married, and Anna began her journey in missionary service. Today she continues as NCM coordinator for Armenia and as district secretary, and has added the responsibility of mission finance coordinator. She is currently studying toward ordination.

— This story was originally published in the March 2016 edition of Where Worlds Meet, the monthly newsletter of the Church of the Nazarene Eurasia Region. Download and print out the whole edition.