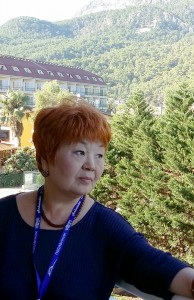 For Zhanna Yugay, who believed that her own knowledge and hard work were enough to secure a foundation for her life, what began as a simple interpreting job became the start of a faith journey.

It was 1996 when South Korean missionary Michael Park came to Astana, Kazakhstan. In those days, in a nation climbing out of the ruins of Communism, religious activities and missionaries were rare and many people visited his church from curiosity.

During the first year, Park preached in the Russian language and, while he could speak it, he wasn’t fluent enough to share the Good News clearly with the people. A solution to this obstacle had to be found.

Knowing that his friend Zhanna Yugay, whose parents were originally from South Korea, could translate from Korean, Park approached her with a proposal to become an interpreter, and she agreed.

Zhanna began to attend the Church of the Nazarene as an interpreter — who did not believe in God. When she studied at the university in Saint Petersburg and later had practical lessons in Moscow, her friend showed her paintings of Jesus at the Tretyakov Gallery, but they never impressed Zhanna. Besides, no one talked about God with her, so faith was a foreign matter, and she knew she could rely on herself.

Every day, Park prayed for Zhanna to be found by Christ, yet she relied mostly on her mind’s abilities to translate the heartfelt sermons. She was not moved in her spirit by what she was interpreting for the congregation. It took two years since their meeting for the Good News to reach the heart of Zhanna.

Due to a flight delay, she stayed at a pastors’ conference for two additional hours in Chekhov, in the Moscow region. All the missionaries and pastors prayed together on their knees and Zhanna pretended to do the same, while she actually watched everyone. It stunned her to see all these people being so honest and sincere in their prayers, some even with tears in their eyes. A question was born in her mind: “Am I wiser than all these people? Why do I cling to my own way?”<

A verse she had heard from 1 Corinthians 1:25 came to her: “For the foolishness of God is wiser than human wisdom, and the weakness of God is stronger than human strength.” That truth became the catalyst to Zhanna sincerely joining the others in prayer.

“I asked God to forgive me and told Him that He can have my life. I wanted to be in His hands and to live according to His will. I opened my heart to Jesus Christ and my life has never been the same ever since,” shares Zhanna. “There were times when I was overwhelmed with joy and people back in our home church came up to me and told me that I have changed somehow. Within a week, I became a different person. I realized that my reaction to things happening around me has changed, as if my world became brighter.”

Granted, everyday life goes on and Christian faith is not based on emotions only, so Zhanna strives to do everything she can for other people to see the Lord every day in her. She says, “It’s not easy. Actually, it would’ve been impossible if not for the Holy Spirit’s support and strength.”

She became a pastor in 2001, after Park talked about the necessity for a local pastor for two years. Zhanna agreed with him, but did not think he was actually praying for her to be the pastor, instead thinking about other younger people who were active at the church.

“It was a Sunday, and before the service, I felt so light, and then Pastor Michael asked me to take the role, and I felt the heavy weight settle on my shoulders. For two days, I kept thinking of the reasons why I couldn’t be a pastor. However, I did make my decision in the end.”

Later, when a district superintendent was needed, Zhanna was asked to be the interim superintendent after Park had to return to Korea. The other missionary, who was getting ready to assume the role, had trouble with documents and someone was needed in the meantime. Since she has spent many years working hand in hand with Park, everything was familiar to her. In 2009, the decision has been made by Gustavo Crocker, former Eurasia Regional director, that Zhanna would remain in the superintendent position, and she has been serving ever since. She is also the administrator of the European Nazarene College Central Asia Learning Center.

Zhanna’s life is an example of the importance of persevering in prayer for those who don’t yet know the Lord. Although it took several years for Zhanna to recognize her need for God, Michael Park’s prayers for her were finally answered.

— This story was originally published in the March 2016 edition of Where Worlds Meet, the monthly newsletter of the Church of the Nazarene Eurasia Region. Download and print out the whole newsletter.